Degrassi the Boiling Point is a Canadian drama air from Monday to Thursday every week. The series shows lives of a group of teenagers who lived on or near De Grassi Street in Toronto, Ontario. This week the ‘Degrassi: The Boiling Point’ – Purple Pills both part 1 and 2 aired on Monday and Tuesday 23, 24 August 2010 and “All Falls Down” Part 1set to be air today 25th August 2010. If you missed it on TV channel, now never worry the chance is still remain for you, watch the complete reply of the week’s episode will be on Friday 27, 2010. Get Degrassi the Boiling Point – Purple Pills, Part 2 Promo and Highlights below.

On Monday, 19 July 2010, ‘Degrassi: The Boiling Point’ season 10 premiered in Canada and on 20 July 2010 in the United State. The tenth season will consist of forty-eight episodes. Degrassi the Boiling Point – Purple Pills, Part 2 follows the story of Monday episode Purple Pills, Part 1 in which Fiona becomes depressed, when she has to record her testimony against Bobby, and self-medicates by drinking champagne, rather than taking the prescription her therapist gave her. Prior, Holly J. is worried that this will affect the parent’s decision on a Vegas teamed school dance, but the theme goes ahead. Anya again asks Riley when he is going to come out, after a good date with Zane. He decides to run for king and queen for the upcoming school dance, but he decides to confirm his sexuality with his teammates, when the nomination list is released before the last football game, and Drew defends him in the following harassment. In the meantime, Adam is feeling rejected by Eli, now that Eli is in a relationship with Clare. Adam decides to be friend Fitz despite Eli and Clare’s warnings.

In Degrassi: Purple Pills, Part 2, to help reduce stress, Fiona continues to drink champagne, during both her deposition against Bobby, and an exam at school. After Fiona convinces herself she is crazy, Holly J. finally convinces her stop, to take the prescribed pills, and film a proper account of the events with Bobby. Riley begins questioning being a trailblazer for homosexuals in sport, when a college football scout comes to Degrassi, and offers him a scholarship. After talking with Zane and Coach Armstrong, He takes the offers. In the meantime, Adam accepts Fitz’s friendship, until offering himself in a sparring match, and Fitz tells him to fight Bianca. The feud between Fitz and Adam escalate from a punch in the hallway, to a meeting in the parking lot, until Eli and Clare intervene to stop Adam. 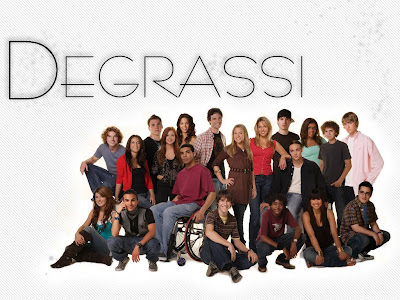 Now, its time to enjoy Degrassi: The Next Generation that come back with more creation. The series have aired 22 episodes as of August 24, 2010. Following episodes of Degrassi: The Boiling Point Season 10 set to be air soon.