On Thursday, actresses Cybill Shepherd (“Moonlighting”), Linda Evans (“Dynasty”) and Teri Hatcher (“Desperate Housewives”) visited “The Oprah Winfrey Show” to discuss about the issue of aging, beauty and what our society says to women as they grow older. 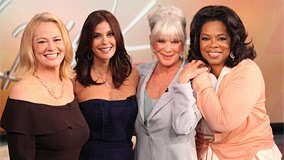 Teri Hatcher says of her now-infamous no-make-up pictures that circulated on the internet, “You feel like: ‘Isn’t that the person you want to be loved? That’s the friend … that’s the partner I want to be in a relationship. That’s the mom I want to be. Really, that’s what’s important.” “Listen, I love looking at all the glamorous pictures. That’s fun too,” she continues. “I think if we can accept the truth behind it and reveal the mystery, then we can enjoy both things.“

“Three days ago, I’m outside … I’m starting to hike up in the mountains,” the actress said. “… I’m trying out binoculars, standing on the street, and this lady comes running across the street saying, ‘Oh my God, oh my God, you’re Meryl Streep! I’m so excited to see you.’ “I said, ‘No, I am not Meryl Streep.” “She said, ‘Oh yes you are. You’re Meryl Streep!‘” Shepherd escaped into a nearby store, leaving her boyfriend to clarify with the woman that, no, um, not Streep — rather, Shepherd. And, Shepherd said, “The woman said, ‘Oh, I love her! She’s so beautiful!'” Not a bad problem to have, being mistaken for a two-time Oscar winner? Not to mention, after the fan ran into the store to say how much she loved her, “Ms. Streep” wound up not being asked for ID by the grocery store clerk.

Cybill Shepherd chimes in: “When I was on seven covers of Glamour magazine and I’d walk by all those newsstands every month and see my picture, I would go home and look in the bathroom [mirror] and go: ‘How did this happen to me? Why don’t I look like that cover?’ I had this wonderful success. At the same time, that retouched image is a lie.”

Linda Evans is one of the gorgeous ladies in Hollywood who was born in the year 1942. She made her debut in the early 1960’s in television. Before acted in The Big Valley with Barbara Stanwyck from 1965-1969 as Audra Barkley, she made numerous guest appearances on various shows. In the year 1968, she got married with John Derek. She was John Derek’s second wife.

Cybill Shepherd was born in 1950. At the age of 16, she won a title of Miss Teenage Memphis and quickly turned to modeling. She moved on to movies with 1971’s The Last Picture show after being named Model of the Year in 1968. It was a great beginning that could have launched an even bigger career if she hadn’t fallen in love with the film’s director, Peter Bogdanovich. Bogdanovich, whom she later described as her “Svengali” (someone who exercises excessive control over another), cast her in a string of flops throughout the 1970’s, costing both of them credibility and career opportunities.

Teri Hatcher started her career as a cheerleader while she was in college. She was born in the year 1964. To lend moral support for an audition, she went with a friend to Los Angeles, and end up being cast herself as a dancer on The Love Boat. After guest appearances on TV shows and small roles in movies during the late-1980, Teri landed the role of Lois Lane on Lois & Clark: The New Adventures of Superman with Dean Cain. Today, a best-selling book, two marriages and a lovely daughter later, she stars as Susan Mayer on the long-running series Desperate Housewives.