You are here: Home / Entertainment / Courtney Stodden Boob Job: Before and After Photos

Courtney Stodden Boob Job: Before and After Photos

Plastic surgery is one of the great inventions in medical science that helps you to make you look normal when your face or any body part lost its natural look in any accident. But nowadays with far more advanced medical science technology, plastic surgery has become the kind of craze for those people who are not happy with their natural look and they want to make it more enhanced and sexy. Majority of celebrities have undergone the surgery to acquire sexy look of their lips, breasts and hips. Courtney Stodden who always wants to be natural has loosened up her tag of “fully natural body” by undergoing the breast augmentation surgery. 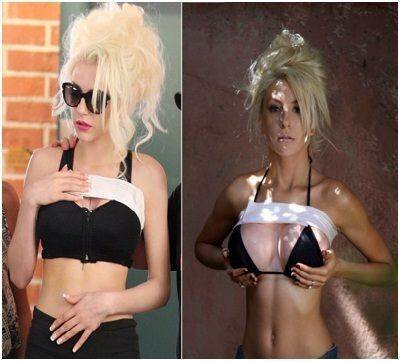 Recently, 18 year old teen bride Courtney Stodden has done breast augmentation surgery to enhance her C cups to double Ds. She had worn the Victoria’s Secret pushup bras to create the illusion for her fans by showing two cup sizes bigger than she was. It is not at all needed surgery, but to just look sexier and improve her feminine look she did it. Courtney Stodden is very famous reality television personality who had came in the news more after her controversial marriage with an actor Doug Hutchison, 51 when she was only age of 16.

About surgery Courtney Stodden stated that, she went for surgery to make her breasts to a double D and she feels very confident with her look after the surgery. She also added that after surgery she thinks that her body looks like Jessica Rabbit-y and it makes her feel sexier and more like a woman. Firstly her husband Doug Hutchison was against the surgery, after some of the debates about it, he agreed with her 18 year old wife and supported her decision.