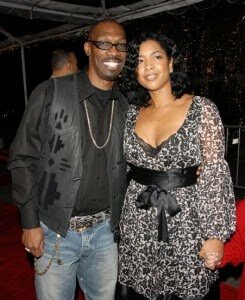 According to his publicist, “Tisha Taylor Murphy, wife of comedian and actor Charlie Murphy, passed away peacefully on Sunday, with family at her side after facing the challenges of cancer for the past two years. The Murphy Family appreciates all the support they have received from friends and fans and requests privacy during this very difficult time.”

Tisha Taylor was not only a gorgeous person, but a caring wife and a perfect mom. Charlie Murphy and Tisha Taylor married on 12th August 1997.The couple have two children: Eva Murphy (daughter) and Xavier Murphy (son). Charlie Murphy has a third child from a last relationship. Charlie Murphy is the brother of fellow comedian Eddie Murphy and is well-known for his roles on the now-defunct Comedy Central series Chappelle Show and BET’s We Gotta Do Better.
Our sincerest and deepest regrets go to the Murphy family.