Telugu movie Brindavanam is directed by Vamsi Paidipally and Produced by Raju Brindavanam Dell. Kajal Aggarwal, Jr.NTR, Samantha, Srihari
are in cast list of Brindavanam movie. Brindavanam Going to release in the Theaters on October 1, 2010. Brindavanam is the Low-budget film Rs.32 crore by SS Thaman, which is given as an artist family. 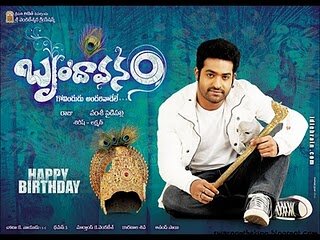 Brindavanam movie audio is set ot launch today (Sunday, September 12, 2010) at Shilpa Kala Vedika, Madhapur, Hyderabad and Nata Simha Balakrishna is expected to grace the occasion. The music is composed by Thaman and it is heard that the shooting part of the film is already done. The audio launch programme will be live telecasted in TV9 news channel.

Brindavanam’ is said to be a family, romantic entertainer with a mixture of mass and class elements.

Dil Raju said, “After listening to several stories, we chose this script. The film would attract all the audiences in general and NTR fans in particular. Our director moulded the film with family sentiments, besides made it an action entertainer. The action scenes shot under the direction of Ram-Lakshman and Peter Haynes would be quite novel. I am confident that our film will be one among the best and top three films released in 2010. Presently the final song is being choreographed in Switzerland.”

“We are releasing the music this Sunday on the occasion of auspicious Vinayaka Chaviti festival. We are extremely happy with the way the film has been shaped up. Now I can confidently say that this film would be one of the biggest grocers in the recent times,” said Dil Raju.