A beautiful bollywood actress, Bipasha Basu is recently in news as she posted a picture of two little girls tying her shoe lace on Twitter. She gets trouble due to this Child Labour Controversy picture. 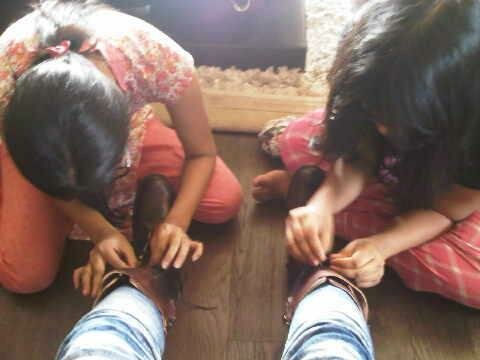 Bipasha Basu has connected Twitter, a social networking site, late. However she has to face a problem because of recently uploaded picture showing two girls tying her shoe laces. The news spread speedily in the nation and her stunt becomes matter of talk among the people. Many people believe that she was accused of promoting or employing child labor after shoeing her picture on Twitter.

Later, she has removed picture from Twitter and apologized for her act by saying “Well the ppl helping me in the pix r my friend n sister, who I help often with the same! So am sorry if it hurt anyone’s sentiments! (Sic)”

Bipasha has explained that she has taken the picture at her home that shows her friend and sister were helping her in shoe lace. She put the pics on twitter as a joke. But Bipasha has two sisters, one is married and other is studying in outside of India.

She did not give any identity of the Twitter pics’s girls in press conference of Delhi. Many people and Twitter follower takes this picture as a joke but other thinks two girls of the pics were child labor therefore Bipasha Basu should be arrested due to this act. If Bipasha will arrest in she will have to stay in jail as per Indian Child Labour act.

Bipasha said, “I m not embarrassed abt d pix at al, as it was funny 2 me n still is! But I am shocked that a small thing like this can turn into a furore hitting out on my character and being, Totally Unacceptable!”