Mr Singh Mrs Mehta is hindi bollywood film which scheduled to release on June 25, 2010.And there is no new that this film has some adult scene, so about 16 actress reject this film and at last Aruna Shields ready for this film.

A Pirated copy of Mr Singh Mrs Mehta film was uploaded in youtube with 16 parts. Now it’s hit on web to watch this video.

Aruna, Bhardwaj who is director of this movie has auditioned sixty actresses but all of them rejected because of adult pose. But at last Aruna Shields has signed this film and ready to give nude pose in this movie. 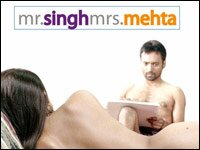 As per the reports, “Mr. Singh and Mrs. Mehta” has escaped censor board’s scissors with just an “A” certificate.

“Aruna is from London. Since skin show is an integral part of acting in the West, she was not too bothered about the nude sequences,” says Bhardwaj. “Also, she understood that the nude scene was a vital part of the film.” Before Aruna, 60 actresses had refused the film because of the nude scene.