For a “second rate actress”, Alyssa Milano has been steadily working in the entertainment industry for well over 30 years now. She managed this while not going batshit crazy like many of her peers, and came out the other side with a happy marriage, a new baby, and continuing employment in a new show on ABC. She has also given back over the years by supporting charities and causes such as UNICEF, PETA, and hurricane Sandy relief. She also looks AMAZING at age 40! I feel bad you are so bitter that you need to be catty towards a decent human being who never hurt you. And BTW, it’s only Maxim, not Playboy, but more power to any woman who has the guts to do either AND look good so soon after having a baby. 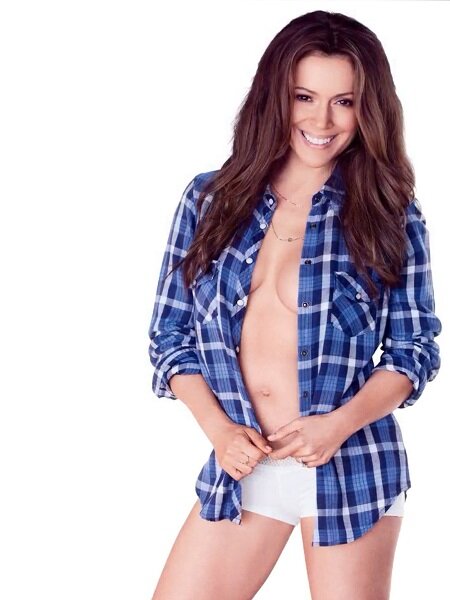 She has the Jennifer Aniston effect. I see the form in front of me, I recognize it as young-woman-beauty and then a part of my brain is like, wait…something isn’t right! Maybe this person is supernatural in a bad way.

Most models on the cover of this Maxim Magazine show a lot more than this! I like Allyssa and thought her acting was fine on charmed, I haven’t seen her in anything else recently, but I am glad she has a new show!

I think Alyssa Milano is gorgeous (now and years ago) but let’s not get ahead of ourselves here. She has aged just like the rest of us have aged in the last 15 years. I think she’s more beautiful in unretouched photos because she actually looks like a real person…the Maxim pictures make her look a little plastic. The picture in the purple bra doesn’t even look like here they’ve done so much to her (naturally beautiful) face.

The correct thing to say is not “hasn’t aged a day” but rather “is aging beautifully”. Girl is and always was stunning, but as a 40 year old mother, she deserves the acknowledgement of aging well.

Those of us well past 40 tend to be proud of it. It’s nice to be in shape and not get all leathery; to still be attractive. But ask anyone over 40 if they’d rather be 25 again and to a person they will say “Hell No!”
I’m sure Milano looks great for 40. These days, most of the 40-year-old women I know look great. But she’s aged, and there’s not a fucking thing wrong with that. Just as 40-year-old men are sexy, just in a different way from younger men, 40-year-old women are, too. This isn’t even something mildly revolutionary, this has been pretty widely accepted for a while, now. Here’s a wacky idea: there are a lot of different ways to be sexy.

Note: The opposite of Alyssa’a graceful aging would be allegedly 43 year old “Tan Mom”, who looks 70.