You are here: Home / Entertainment / ABC Announced ‘Dancing With the Stars’ Cast 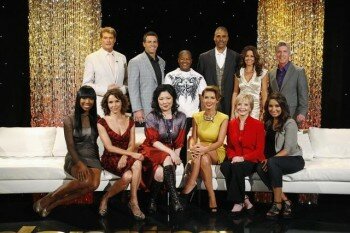 Dancing with the Stars is a reality show telecasting on ABC channel in the United States. In this show, celebrities and professional dancers will perform together. Celebrities include race-car drivers, Olympic athletes, football players, supermodels, actors, singers, astronauts, and teen-heartthrobs. Ballroom or Latin dances will be performed by each couple and contend with the others for judge’s points and audience votes. The couple who receive lowest judge’s marks and audience votes will eliminate from the show.

On 30th August, 2010 the cast of ‘Dancing with the Stars’ announced during the episode of Bachelor Pad during a live press conference that included a Q&A session with Tom Bergeron and Brooke Burke and the new cast. The professionals for the show will declare on 1st September, 2010. Expected professionals are Louis van Amstel, Maksim Chmerkovskiy, Chelsie Hightower, Tony Dovolani, Anna Trebunskaya, Mark Ballas, Kym Johnson, Lacey Schwimmer, Cheryl Burke, Derek Hough, Karina Smirnoff, and Alec Mazo for season 11.

The Season 11 of the ‘Dancing With the Stars’ includes celebrities like David Hasselhoff, Jennifer Grey, The Situation, Bristol Palin, Michael Bolton, Margaret Cho, Kurt Warner, Audrina Patridge, Kyle Massey, Rick Fox, Brandy and Florence Henderson to satisfy millions of fans across the country. The head of casting, Deena Katz said about the stunning experience of casting process, that “It’s like putting together the most bizarre and yet entertaining kind of dinner party, I make a jigsaw puzzle of including something for everybody”, “I make a jigsaw puzzle of including something for everybody. And what I think works best is, let’s say you watch because you love David Hasselhoff and you have no idea who Margaret Cho is — what I love is this idea that you go in watching The Hoff but you then fall in love with Margaret.”

According to Katz, this season cast is her “dream team.” She said she’s been “stalking” Hasselhoff and Grey to be a part of it every season since the show launched in 2005. However they both had prior commitments and reservations about joining. Katz said, “It takes a big leap to do the show, and I get that people have fear and they have commitments” ,”What you don’t realize is that besides the 10 weeks of the show, there are three or four weeks of rehearsal time. Jennifer had some concerns because of ‘Dirty Dancing.’ She knows everybody wants to see her on the show.”

Recently, producers are bombarded with requests from interested celebrities. It wasn’t always that way. The entire cast is made up of people as per Katz’s approach. Katz said “Calling people before we were on the air in Season 1 and saying, ‘We’re going to do a live ballroom dance show with celebrities,’ you could hear the clicks of the phone“.

“You ask and you never know,” she said. “I can tell you this, she’s the only one that when I asked her to join the show, she packed up her truck and drove all the way from Alaska. I always try to have people you’d never expect… And this season, some of the names make you chuckle, others you’re surprised about, and others you think you know, but you’re going to see them in a different light.”

Meet the Cast of ‘Dancing With the Stars’:

Video of Dancing With The Stars contestants revealed from YouTube: