In VMA Awards 2010, the winner of ‘Best Rock Video’ was 30 Seconds to Mars, ‘Kings and Queens.’ On September 12, 2010, the 2010 MTV Video Music Awards held at Nokia Theatre in downtown Los Angeles, and Chelsea Handler hosted the event. Kings and Queens is from their album titled This is War, released in December, 2009.

There was a lot of competition and the groups nominated were as follows:

Florence + the Machine
Title: Dog Days Are Over
Album: Lungs

30 Seconds to Mars won for their clip for “Kings and Queens,” the first single off last year’s This Is War. Earlier, the group had won the MTV2 Award for “The Kill” in 2006. Leto was courteous when he received the award with his band behind him. Currently, 30 Seconds to Mars are in the midst of a world tour that’ll keep them on the road through the first part of 2011. 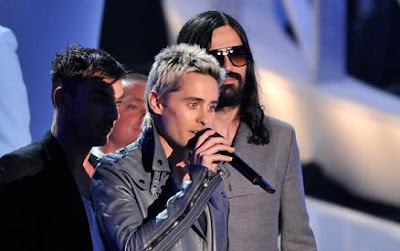