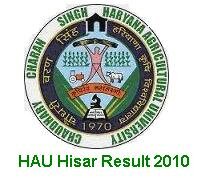 Admission for these programmes would be started in July in order of merit in two counseling sessions. Generally 75 % sits are offered for residents of Haryana and 25% sits are filled through an all-India entrance test organized by the Indian Council of Agricultural Research.

Chaudhary Charan Singh Haryana Agricultural University is one of biggest university of Asia, situated at Hisar in the Indian state of Haryana. It is a leader in agricultural research in India and contributed considerably to Green Revolution and White Revolution in India in the 1960s and 70s. It has a very large campus and also has numerous research centers all over the Haryana state.