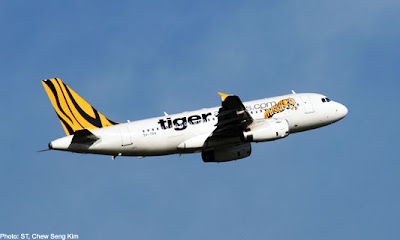 Thailand’s Ministry of Finance owns Thai Airways, majority. Thai Airways will have a 51% stake in the joint venture, while Tiger will own the rest.

Tiger Air shares rose as much as 2 percent to S$2.09, the highest since its January debut.

The two companies said, “Thai Tiger will operate international and domestic flights out of (Bangkok’s) Suvarnabhumi International Airport offering short-haul, point-to-point services within a five-hour flying radius” in a statement.

The companies said, “Low-cost carriers will likely benefit from air liberalization policies in the Association of Southeast Asian Nations, expected by 2015.”

Mr. Piyasvasti Amranand, THAI President, said, “We are pleased to partner with Tiger Airways in establishing Thailand’s newest airline, Thai Tiger. With its disciplined approach to the low-cost model, Tiger Airways has proven that it has the right approach to competing effectively in the growing low fare travel market in Asia. For people in Thailand and the region, our launching Thai Tiger will mean that in addition to the global network of premium services operated by THAI, more people will have access to new low fare, point to point services, giving a big boost to tourism and employment. THAI and a Thai entity will collectively hold 51% while Tiger Airways will hold 49%. The Thai Tiger Board will consist of three nominees from THAI and two nominees from Tiger Airways, with the Chairmanship being held by THAI.”

Mr Amranand added, “We believe that this move will provide revenue opportunities for THAI and allow THAI to be more competitive in the region with the anticipated growth in the low cost market as a result of continued ASEAN air liberalization policies by 2015 which we expect will lead to growth in air travel in the Asian market. Thai Tiger will offer an entirely different line of products to that offered by THAI.”

“Thai Tiger will be well positioned to offer low fares to even more parts of the Asia Pacific region from its base in Asia’s tourism leader, Thailand. Bangkok is a key gateway to the whole of South East Asia and from its base at Suvarnabhumi Airport, Thai Tiger will be well positioned to also serve destinations in North Asia and the Indian sub-continent. Spreading our paw-print means greater economies of scale for Tiger Airways, which in turn enables us to lower costs and fares even further,” said Mr. Tony Davis, Tiger Airways Group President and CEO.

Thai Air President Piyasvasti Amranand said, “The move will provide “revenue opportunities” for the Bangkok-based company” in the same statement.