You are here: Home / Business / Mystery of Foxconn employee suicide

Foxconn Is leading electronics company in china, well known for producing components for Apple, Dell, Hewlett-Packard and other world’s famous companies. Now a days Foxconn tops in news for death of 12 employee in their plant. Most of the case are considered as suicide, but company management worrying about reasons of that. 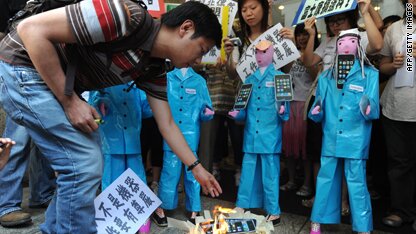 Foxconn is old company and having 800,000 employees in China’s mainland, 420,000 are in Shenzhen. Some of them stays 24 hours and seven days a week in factory complex. Foxconn insists that its workers are treated well and there could be a number of factors at play. Liu said the company is analyzing the mindset of their employees to try and get to the root of the problem.

Founder Gou flew from Taipei to Guangdong Province’s Shenzhen yesterday to see the current situation of foxconn. He said nine of the 11 workers who jumped from buildings this year had worked for the company for less than six months. He said, the run company not a society, As they can’t solve social & personal problems including failed romances.

Company had take several steps like, sealing swimming pool, increased numbers of security guards and fencing on every roof. Management asked their workers to form a 50 members group, that knows each others and watch each other’s backs.

Hardwork for hours and staying away from families may create emotional problems , but foxconn trying to solve mystery of suicide death.