You are here: Home / Breaking / Wildfire spreads to 500 Acres in Arizona

Wildfire spreads to 500 Acres in Arizona

On Saturday, 19 June, 2010 a wildfire south of Interstate 40 in Flagstaff which grew to between 500 and 600 acres. As the wildfire spreads to 500 Acres, the residents more than 1,000 homes just north of Flagstaff, Arizona are being advised to evacuate.

On Monday, June 21, 2010, with hot, dry and windy weather, fire crews struggled to hundreds of homes and businesses from a 1,500-acre wildfire creeping into northern Arizona’s scenic Oak Creek Canyon. Official said, on Sunday the fire began and spread quickly, the evacuation of about 400 homes and businesses is being forced in the narrow canyon and about 100 homes in five subdivisions on the rugged north side of Sedona. The fire was 5 percent contained late Monday afternoon.

Strong winds fueled the flames. City spokeswoman Stephanie Smith said, “The higher winds definitely played a key role in the extreme behavior of the fire today and it will continue tomorrow.”

The fire had moderated somewhat but was still strong, said by Fire spokesman Eric Neitzel around midnight. He also said that flames came within 500 yards of a scattering of homes beneath the mountain, spurring firefighters to build a containment line in the evening. No structures have burned. 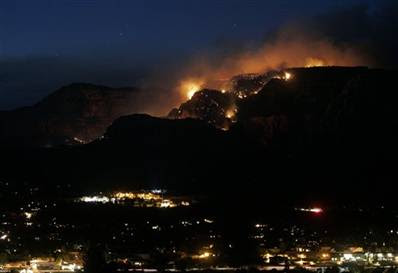 Fire suppression chemicals were dropped by five helicopters and eight air tankers and the blaze was battled by 300 firefighters. The fire will be turned over to a federal management team Monday, Smith said, allowing for even more resources. The city and Coconino County declared states of emergency, and officials closed U.S. 89, a key route to Grand Canyon National Park about 75 miles to the north.

There was a scare earlier in the day with a report that several hikers were missing in the burning region, even there have been no reports of any major injuries in the fires. All the hikers were safe and accounted for late Sunday evening, said by smith.

A third smaller wildfire that broke out near Interstate 40 in western Flagstaff was suppressed within a matter of hours, Smith said. A vehicle caused that fire into wooden area. For relocated residents, a shelter was set up by the American Red Cross at a Flagstaff middle school but overnight was being stayed by few. 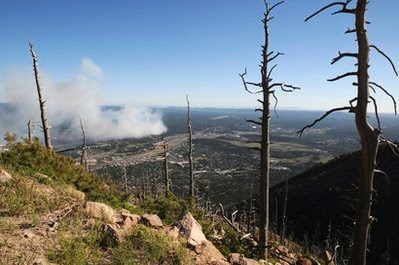 When the neighborhood of Jennifer Whitehair was being evacuated, at that time Jennifer Whitehair was having lunch in town. For seeing flames in the near distance, she rushed home and had 15 minutes to grab pictures, a Navajo rug and a painting, “a few things that mean something,” she said. She later stationed herself at a nearby gas station watching as the flames made their way over a mountain and within several hundred feet of her home. She said she wished she had sprayed water on her roof or dug a trench on her 2.5-acre property.

“When something like this happens, it makes you thankful for the things you do have,” she said. “The material things seem less important, although in one sense it’s your life.” 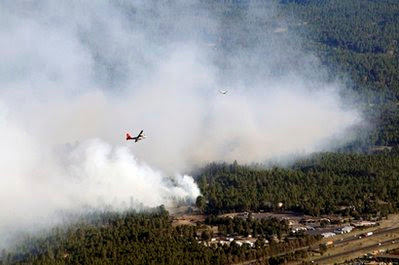 Flowers are being planted by Kyle Lathrop in his backyard and initially thought the fire would bypass his community. But when he saw a neighbor loading horses and talked to others, he said he knew it was time to go. He packed up some important possessions, his 7-year-old dog, Madline and headed to a shelter to check in but planned to stay elsewhere.

“That’s always a risk, part of the pleasure of living in the semi-rural area,” he said. “You get the view, but you have the risk (of fire).” 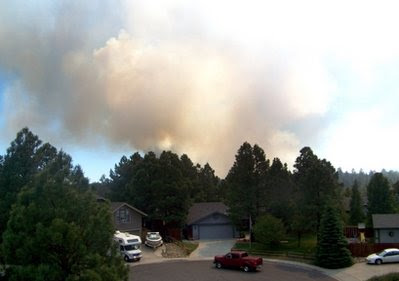 Fire officials did not know what sparked the second blaze. On Sunday, a California man was arrested on suspicion of starting the Hardy fire by leaving behind hot coals at a campsite just outside the city.

The 54 years old Randall Wayne Nicholson was arrested on a misdemeanor charge of burning of a wildland, city spokeswoman Kimberly Ott said. Nicholson, whose hometown was not immediately available, was being held on a $2,500 bond at the Coconino County jail. It was unknown if he had an attorney.

“The Southwest had a wet winter and then the spring turned dry,” said by Rick Ochoa of the National Interagency Fire Center in Idaho. That combination has “increased the fire potential quite a bit in the Southwest,” he said.