About 52,500 Roman coins of varying denominations were found in a large pot by a British treasure seeker which is one of the largest treasure hoards ever found in a single vessel in Britain, Officials said Thursday. According to the Somerset County Council and the Portable Antiquities Scheme, the coins were in a gigantic jar just over a foot below the surface and were located by Dave Crisp, 63, from Devizes in Wiltshire. The hoard dates from the third century AD and was found buried in a field near Frome in Somerset. The hoard was valued at 3.3 million pounds ($5 million), includes hundreds of coins bearing the image of Marcus Aurelius Carausius, who seized power in Britain and northern France in the late third century and announced himself emperor.

Archaeologists believe the hoard, which sheds light on the economic crisis and coalition government in the 3rd century under Emperor Carausius, will rewrite the history books. He told how his detector gave a ‘funny signal’, prompting him to dig down through the soil. ‘I put my hand in, pulled out a bit of clay and there was a little Radial, a little bronze Roman coin,’ Mr. Crisp told the BBC. ‘Very, very small, about the size of my fingernail’. He added: ‘I have made many finds over the years, but this is my first major coin hoard.’

According to Anna Booth, Somerset finds liaison officer, the find was initially made towards the end of May and since then the site has been excavated and the British Museum has begun the conservation process. A total number for the coins was only reached last week.

A team of heritage experts who have been involved in the site’s excavation have nothing but praise for the finder of the hoard. Anna Booth said: “The discovery at Frome stands out as a story, mainly because Dave Crisp reported it immediately to his local coroner.”This meant we got to excavate the site in its original, undisturbed state. Mr. Crisp took part in this process with us, even going to the extent of camping there one night with his grandson, to make sure that the site was safe over night.” 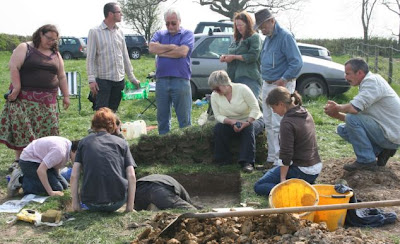 The coins were discovered inside a ceramic pot, about 50cm in diameter, made of black burnished ware. It would have been placed in the ground towards the end of the third century AD. Anna Booth described it as a ‘coarse, average type of vessel’. She added that although the pot was intact in the ground, it had been cracked, making it easier to get the coins out.

“The pot was enormous, there is no way that anyone could have carried it, which we think makes it unlikely that the money was hidden by someone who intended to return to it. The pot has been carefully placed in the ground using packing material such as reeds and grass, so we think it could be a ritual offering.”

The hoard is one of the largest ever found in Britain, and will reveal more about the nation’s history in the third century, said Roger Bland, of the British Museum. The find includes more than 760 coins from the reign of Carausius, the Roman naval officer who seized power in 286 and ruled until he was assassinated in 293. Bland said, “The late third century A.D. was a time when Britain suffered barbarian invasions, economic crises and civil wars”.

“Roman rule was finally stabilized when the Emperor Diocletian formed a coalition with the Emperor Maximian, which lasted 20 years. This defeated the separatist regime which had been established in Britain by Carausius. “This find presents us with an opportunity to put Carausius on the map. School children across the country have been studying Roman Britain for decades, but are never taught about Carausius our lost British emperor.”

Mr. Crisp, who is secretary of the Trowbridge Metal Detecting Club, said: ‘Leaving it in the ground for the archaeologists to excavate was a very hard decision to take, but as it had been there for 1,800 years, I thought a few days more would not hurt. ‘My family thought I was mad to walk away and leave it.’ Since the discovery in late April experts from the Portable Antiquities Scheme (PAS) at the British Museum have been sifting through the coins.

The coins were all contained in a single clay pot which although it only measured 18 inches across, would have weighed an estimated 25 stone. The discovery of the Roman coins follows last year’s discovery of a hoard of Anglo-Saxon coins in central England. The so-called Staffordshire Hoard included more than 1,500 objects, mostly made from gold. Anna Booth, local finds liaison officer said, ‘Because Mr. Crisp resisted the temptation to dig up the coins, it has allowed archaeologists from Somerset County Council to carefully excavate the pot and its contents’. A selection from the find is on display at the British Museum until mid-August. 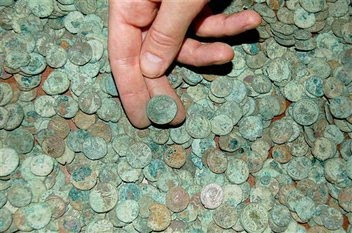 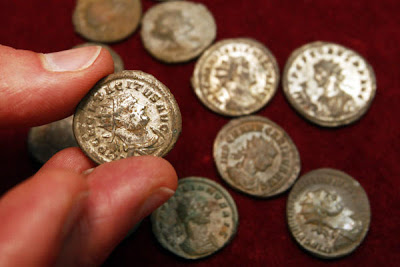 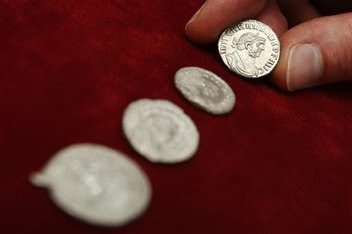 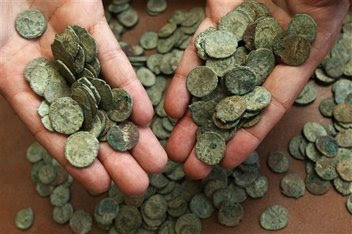 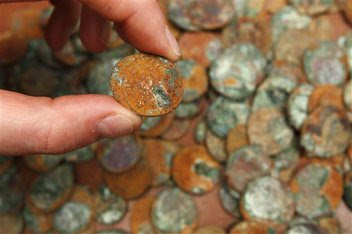 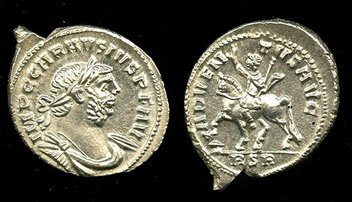 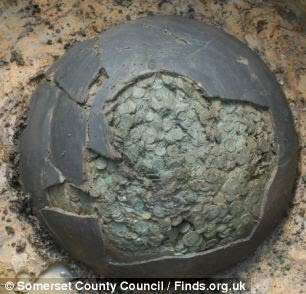 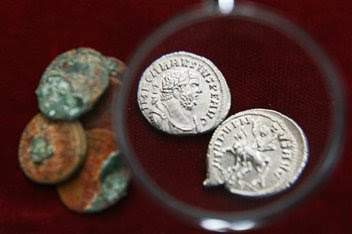