Today, in early morning two trains misshaped in West Bengal, at least 65 people were killed and more than 200 injured, when the speeding Sealdah-bound Uttar Banga Express rammed into the stationary Bhagalpur-Ranchi Vananchal Express from the rear at Sainthia station in West Bengal’s Birbhum district. 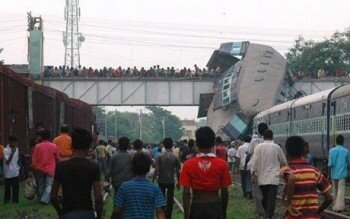 Additional Director General of Police (Railways) Dilip Mitra said, “Thirty-eight bodies have been recovered so far. Majority of the victims were passengers of Vananchal Express”. The accident took place about 2.15 a.m., rudely jolting hundreds of sleeping passengers. The driver and assistant driver of the Uttar Banga Express and the guards of the Vananchal Express were also died in this accident.

Local people from this business hub were the first to rush in for the rescue as cries of the injured passengers, many who had lost their limbs, rent the air. The authorities, facing allegations of a delayed start to the rescue efforts, were using gas-cutters to cut open the coaches and bring out the dead and rescue the injured. Birbhum Police Superintendent Humayun Kabir told IANS, “We have managed to extricate the bodies from two of the three compartments so far”.

The Telegraph Reports “Railway Minister Mamata Banerjee raised the possibility the crash could have been another case of sabotage, two months after Maoist rebels were blamed for a derailment that killed 145 people.” Ms Banerjee said she was rushing to the scene to investigate. “We have some doubts in our mind,” she said.” “Accidents are common on India’s sprawling rail network, one of the world’s largest, with most blamed on poor maintenance.”

“Banerjee told reporters while leaving for the accident site: “We have some doubt in our mind. We are searching for information. Let us now find details.” Describing it as “a sad incident”, she said: “Human lives are very important.” The minister said: “We are really sorry for this. Sorry to see two incidents take place in West Bengal in two months.” “Whatever happens is not (a) casual thing. We will take necessary action. We will take strong steps whoever is behind this.”

Eastern Railway General Manager V.N. Tripathy said an enquiry has been ordered into how both the trains came on to the same line. Train movement on the down line has been disrupted in the Bolpur-Rampurhat section. The down Malda-Howrah Intercity Express was among several trains cancelled and many trains were stranded on the down line. A railway official said except the four affected coaches, the ill-fated Vananchal Express was brought to Burdwan enroute to Ranchi. After replacing the damaged engine, the Uttar Banga Express has been brought to Rampurhat.

Video of Train accident in West Bengal from YouTube: