You are here: Home / Breaking / The Story Behind #AlexFromTarget

Check out here the story behind how a 16-year old young Target cashier from Texas became an Internet sensation overnight!

Meet Alex Laboeuf – a teenage American boy who has become an internet sensation for absolutely no apparent reason. He rose to fame overnight after an anonymous customer took photo of him while bagging groceries at a Target retail store and posted it to Twitter. Needless to say, the picture quickly went viral in a big way on Twitter. Hundreds of thousands of teens retweeted the picture with #alexfromtarget. Even Alex’s own follower count soared from few hundreds to more than 725,000 almost overnight. Read on to get the inside scoop on how Alex from Target got so incredibly popular. 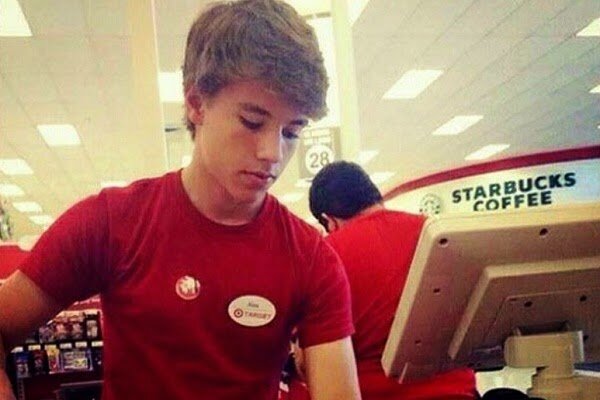 Where did the original photo come from and how did it spread like fire?

It all started when two teenage girls named Alanna Page and Brooklyn Reiff spotted a handsome cashier – Alex – at their local Target store. Brooklyn snapped a picture of him while he was scanning and bagging the items, and she (@brooklynjreiff ) tweeted the photo on October 26. From there, the picture migrated to Tumblr, where a U.K. based Twitter user Abbie @auscalum found it and she reposted it on Twitter with a caption “YOOOOOOOOOO” on November 2nd. This is the tweet that went viral. May be because @auscalum is a fangirl of 5 Seconds of Summer (an Australian pop rock/pop punk band) and she already had an impressive follower count for a good-looking teen.

Within 24 hours of @auscalum posting the picture, the tweet gained more than 1000 retweets and 2000 favorites. The hashtag “#AlexFromTarget” was mentioned over 1 million times on Twitter, whereas the keyword “Alex From Target” was googled over 200,000 times. In no time, Twitter users began searching for information about the good-looking boy and eventually they identified his Twitter handle @ acl163.

One of the main reasons why the photo became viral so quickly is because it was shared on Twitter. Unlike other social networking sites, Twitter has fewer filters. Unless and until you make your account private, there’s no limit on the number of followers you can have, and also any of them can retweet your posts. Hence, if Brooklyn had shared Alex’s picture on Instagram, Facebook or Snapchat, he would never have been so famous.

On 3rd of November, Dil-Domine Jacobe Leonares – the founder and CEO of a Los Angeles based marketing company Breakr – posted a statement on his Linkedln page claiming that the whole ‘Alex from Target’ phenomenon was engineered by them. The purpose was to see how powerful the fangirl demographic is to make an overnight viral internet sensation. He even claimed that @auscalum was hired by the company to spread the story on Twitter. However, soon it was made clear that all these claims were false. Both Alex and @auscalum denied any involvement with Breakr. @auscalum also made it clear in a tweet that she found the picture on Tumblr and simply shared it with her Twitter followers. Later, Leonares backtracked some of his assertions and clarified that Abbie and Alex Lee were never hired by Breakr.

The company has officially stated that they are simply an observer of this whole phenomenon. They have don’t have any affiliation with the company that is trying to take credit for launching the viral hit, and that they had nothing to do with the creation, listing or distribution of the picture.

While shopping at a local Target store, a girl named Brooklyn saw a handsome cashier named Alex. She snapped a picture of him and simply shared it with a friend on Twitter. She never intended this to become a viral sensation. Nevertheless, Alex seems to be enjoying all the attention that he is getting. The photo has made him an instant Internet star. He has already got nearly half a million followers on Twitter. He appeared on the Ellen DeGenered Show. Plus, as per reports, Alex has started getting offers from Hollywood!