In the massive Tehachapi Fire, more than 40 homes and 150 structures have been destroyed. The wildfire began on afternoon Tuesday, July 27, 2010 in Tehachapi and quickly spread near the Old West Ranch community, southeast of Tehachapi. 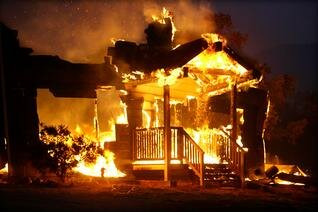 Government Arnold Schwarzenegger announced a state of emergency as a result of both what was being called the West Fire and the ongoing Bull Fire in Riverkern. The announcement frees up additional state resources to fight the fires.

According to officials, 150 structures were threatened and about 200 firefighters were on the scene, with water dropping aircraft.

Almost a dozen volunteers from the American Red Cross-Kern Chapter at the old Jacobsen Jr. High School, 126 S. Snyder St set up a shelter for residents. Less than 10 people had registered to stay overnight at the shelter from late Tuesday evening.

Old West Ranch, the small hill community was evacuated. The area is about 70 miles north of Los Angeles. 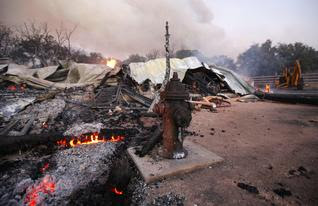 A groundskeeper at the California Correctional Institution, Carolyn L’Heureux saw the smoke when she was on her way home from work. She started to the shelter and has heard from friends that her home burned down.

L’Heureux said, “I got through birth so I’ll get through this.” She planned to spend Tuesday night with her daughter in Palmdale.

Even though losing her home, she said she should live in the area again in a heartbeat. She likes the solitude, and said you have to be there to experience what it’s truly like.

L’Heureux’s friend, Merle Carnes, said that it’s the type of community where everyone checks on everyone else to see how they’re doing. The president of the local homeowners association, Carnes said that they will be taking care of people who have suffered losses.

The fire rapidly spread, Wayne Butchko, a residents did not even have time to grab his dentures and he escaped with his two dogs, Feather and Coco. He said, “I could feel the heat on my back. I could see the flames, and the trees were just popping with explosions.”

He said that firefighters have a big job ahead of them, and he expected the wind that kicks up at night in that area will only make things worse.

George Plesco’s hair was scraggly and his shirt discolored, but he was alive. His house on Snowshoe Court was destroyed. Plesco said, “When I first saw it, it was a small fire, but with the wind and the trees it just blew down the canyon.” 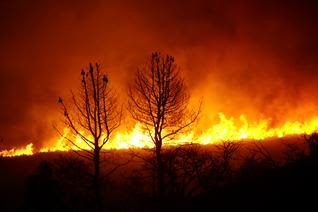 Plesco also said that exploding propane tanks blew debris a hundred feet in the air. The roar of the fire sent his cats scattering. He added, “My stomach’s in a knot.”

Volunteer of Red Cross, Diane Arends said shelters have been set up in Tehachapi before, but nothing of this magnitude. She said a lot of people seemed relatively upbeat considering the circumstances.

The fire had burned an expected 500 acres at about 6 p.m. From Los Angeles County, scores of county firefighters were at the scene with reinforcements arriving.

Kern County fire spokesman Anthony Romero said, “The wind has been a big factor. It’s changing on us a lot. Now it’s blowing from the southeast, going over a couple of ridges.” Romero added that there was zero containment. 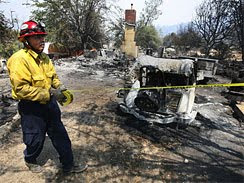 The devastated area is a unique, self-sufficient community said that a resident, Mark and Kassandra McQuillen, out pushing their 2-year-old daughter when they saw the fire go over the ridge. Kassandra said that they live minimally. Everything you take for granted these people have already given up. Mark McQuillen added, “It’s off-the-grid living.”

Mike Niccoli, a reside on Summers Drive near Mountain Valley Airport, said that about 4 p.m., the fire had been burning in the heart of Old West Ranch, a rural enclave southeast of downtown Tehachapi, for about 2 1/2 hours. He also said, “I’ve got a lot of friends up in Old West Ranch and we’ve been calling. We can’t get a hold of anybody. We see a huge amount of traffic going out of the area so we figure the fire department is evacuating.”

Niccoli said he was about two miles from the blaze and could see flames topping the tall pines in the area. He could also judge, the flames were at least 100 feet high.

“We’ve heard a lot of propane tanks going off. I’ve been up here for 10 years. I’ve seen fires, but never as bad as this,” Niccoli said.

In the lower elevations, residents parked along the roads and watched the fire from the distance. After dark, Summers Lane road leads into the affected neighborhood, looked like the site of a great battle.

Fire is spit out from the branches of Oak trees. Wooden barriers that once sheltered livestock burned and smoked, half-consumed by the flames. Embers blew traverse the dirt roads like hot orange confetti farther up the hill and this neighborhood had been forever changed.