On early Sunday morning, a dead body of a father and son pair found in separate area. It seems to be a murder-cum-suicide case. On Saturday night at 8 p.m., Businessman Shariffudin Abdul Kader spent time with his favorite child, driving him around in a rented Toyota Altis they checked into the Copthorne Orchid Hotel in Dunearn Road. 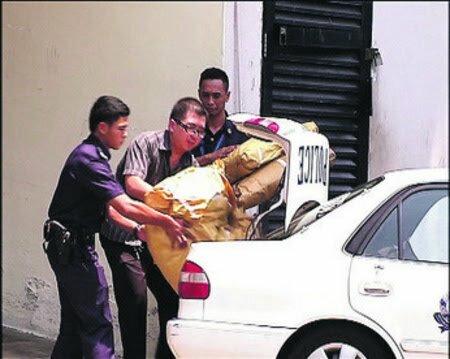 The dead body of 56-year-old Shariffudin Abdul Kader was found at the ground floor of block 35 Marsiling Drive at 5:20am in apparent suicide. A note was also found on him by police, in which it was written about his teenage son, who was traced to the Copthorne Orchid Hotel along Dunearn Road. Channel NewsAsia understands he did not live there, but at Amber Road in the east. “We managed to identify and trace the son of the deceased to a hotel located along Dunearn Road. Upon our arrival at the hotel room, we discovered a 19-year-old Malay man, who is the son of the deceased, lying motionless inside the hotel room,” said Humphrey Sew, Media Relations Officer of the Singapore Police Force.

At the hotel room, police found the body of his 19-year-old son, Mr. Shah Amin who facing upwards on a king-size bed. He was dressed in a white T-shirt and black Bermuda shorts which is as same as father had on when the police found him. His body is covered with a blanket. He had visible injuries on his neck that doesn’t suggest any signs of a struggle. The cases have been classified as unnatural deaths but have not ruled out foul play. Police believed that the two incidents are related with each other.

The 440-room four-star hotel is popular with tourists as well as Singaporeans, and is slated for redevelopment into a condominium later this year. In June last year, Mr. Shariffudin had arranged a similar stay at the hotel, said Mr. Gerry De Silva, head of corporate affairs of Hong Leong Group Singapore, which operates the hotel. Mr. De Silva said that the hotel staff did not sense anything amiss last Saturday night and that Mr. Shariffudin was even seen smiling when he checked in alone.

The hotel is helping police with the investigations. Gerry De Silva, head of Corporate Affairs at Copthorne Orchid Hotel said: “The police came at 6.45am, and asked us to check the room. We opened the room for the police and there was a body there. “We’re helping with investigations in any way that we can. We are in the busy period now, because of the F1 and the general strong demand in rooms… but we’re ready to help them in case there’s anything that they need.“