You are here: Home / Breaking / Sathya Sai Baba’ Funeral to be held on Wednesday

Sathya Sai Baba’ Funeral to be held on Wednesday

85 years old Hindu holy man, Sathya Sai Baba died on Sunday, April 24, 2011 morning due to cardio-respiratory failure. Baba’s Funeral will be held on Wednesday April 27, 2011 and five lakh people are expected to join in it. Till that his body will remain at ‘Sai Kulwant Hall’ in Prasanthi Nilayam Ashram for his last appearance to his devotees. 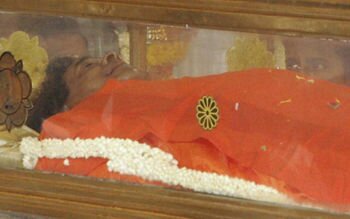 Sathya Sai Baba was hospitalized since March 28, 2011 in Sri Sathya Sai Institute of Higher Medical Sciences hospital because of cardiac problems. He spent around a month on breathing support as well as dialysis. His condition was worsening with days as many of his organs stopped to respond medicines and on Sunday 24 April, 2011at 10.15 am, doctors of the hospital declared this godman as passed away.

The Andhra Pradesh Heavy Industries Minister, J. Geetha Reddy announced that with accordance of Baba’s family and Sri Sathya Sai Central Trust, Baba’s burial will occur on Wednesday morning. The cremation of Baba’s body will take place at his ‘Yajur Mandir’ residence corresponding to the custom employed for spiritual leaders in India. It is supposed that at the time of renunciation, Sanyasis will characteristically offer their bodies to fire through dressing themselves in saffron or flame-coloured robes. However, the exact time for the funeral is not declared yet.

Sathya Sai Baba was most popular as his ashrams are present in more than 126 countries and his devotees are among politicians, industrialists, celebrities and top athletes. A deep grief is spread in all followers of Baba due to his death. Women, who were selling marigold garlands outside the ashram, burst into tears and crowds of devotees began to gather at ashram while they heard about Baba. People believed that Sathya Sai Baba will again born as ‘PremaSai.’