A massive explosion rocked in the San Francisco suburb of San Bruno, near San Francisco International Airport in California on Thursday, 9 September 2010. Reason of the explosion does not known but before explosion, seriously big fire, look like some sort of gas, comes out and more than two dozen homes on fire since they broke out at around 6 pm on Thursday. 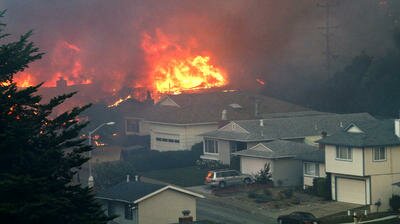 After the initial explosion, two men were found dead. Five more went to area hospitals with severe burns, including Javier Ramos, who later died in the hospital. Several buildings were shown engulfed by visuals of the fire in flames as a black plume of smoke arising from the suburbs. The initial speculation about the fire was this explosion is the result of plane crash, which has been refuted and the possibility of a ruptured gas pipeline, which cause the blaze is being investigated into it. According to Local media reports, the successive explosions rocked due to the scores of cars parked in the locality.

Hundreds of homes as well as a community college were included in the area. People believe that it happened due to the amount of fuel and the fact that the area in question is within the flight path of SFO. One witness claims that he has heard the sound of a commercial jet engine, which was coming out of shaking his home, and then the sound of an explosion. But, it is not confirmed that a plane has crashed in a populated area of San Bruno. 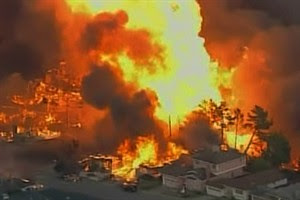 Some people saw the rising ball of fire, which was coming from San Francisco. According to witnesses, the fire burnt in a populated area, fire and rescue response teams are on the way to the scene. The Ball of flames originated from the epicenter of the explosion, which was as high as 100 feet. A cloud of dark smoke was pouring from the top of the fire ball, which is common with jet fuel fires.

Federal Aviation Administration (FAA) spokesman Ian Gregor said no plane had gone down in the neighborhood. “At this time we don’t think it’s a plane”. First responders via emergency scanners initially said, “A ‘large commercial aircraft’ had crashed in the area, setting scores of homes on fire. But they later said the cause appeared to be a natural gas explosion and not a plane crash.” 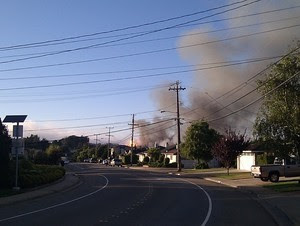