You are here: Home / Breaking / Renuka Shinde and Seema Gavit are biggest Shame on name of Indian Nari

Half-sisters Renuka Shinde and Seema Gavit are  first women in Independent India to be hanged to death for kidnapping 13 kids and killing 11 brutally.

Indian woman is especially known for their tender care and cheerful nature all over the world. She can be easily and adorably portrait as loving mother and have very soft corner for any small kids she met. But, a big black spot on loving and caring image of Indian Woman is never going to fade out due to inhuman and demonic actions of Physcho sisters Renuka Shinde and Seema Gavit. Killer sisters have kidnapped 13 kids who are aging between one to ten years and have brutally killed 10 kids. Indian president, Pranab Mukharji has also rejected their mercy petition. 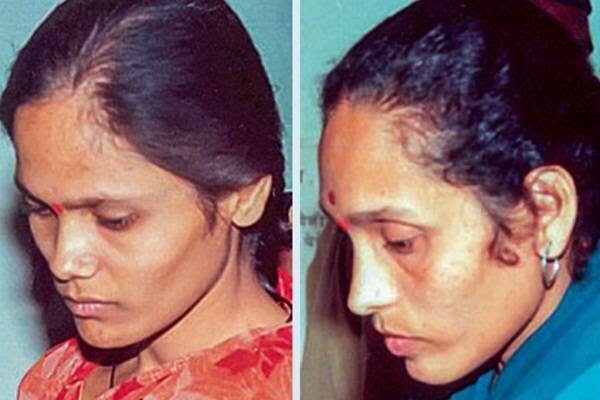 A most sensational and shocking case of anjanabai gavit, a mother of Renuka Shinde and Seema Gavit has closed with the death statement in the final hearing of court. Two sisters and her mother have dark past that lead them to path of murders and kidnapping. Mother of two sisters Anjanabai was married to Kiran Gavit who left her. Anjanabai was started thieving activities with help of her daughter to fulfill basic needs and it leads to horrific end of their lives.

Half-sisters Renuka Kiran Shinde and Seema Mohan Gavit have made their name with shame in Independent India history. Half-sisters have become first women to be hanged to death in Independent India. Mother of both sisters Anjanabai was dead because of illness after the two years of arrestment. Right now both the sisters are in Yerwada jail. Half-sisters got the kidnapping skills from their mother who thieves people in crowded place like fairs, festival celebrations and political gathering.

First victim of sisters was Santosh – a toddler. They have kidnapped him and when he was not helping both sisters to do pickpocketing, they become angry. To stop shantosh from crying, they have banged his head against electric rope resulting in death. After killing the snatosh, they have disposed his body near the rickshaw heap.

Half-sisters have also killed one another small kids very cruelly. They hung a two year toddler upside down and smashed kid’s head against wall. After that they chopped him in pieces. After killing innocent two year toddler, they went for movie and eat bhelpuri with natural ease even though they have bag filled with chopped parts of kid below their feet! It is really inhuman and physco situation.

Their list of victims varied from daughter of Anjana’s former husband to the baby of beggar. Husband of Renuka, Kiran Shinde helps to kidnap kids with professional and never failing kind of idea. Now, after President has abandon mercy note of half-sister to remove death sentence, both are counting their days till they will meet the unnatural death due to their inhuman and brutal acts on small kids.

April 1991: First victim of Renuka Shinde and Seema Gavit – santosh has been killed by banging his head against an electricity rope

October 1996: 10th victim of Renuka Shinde and Seema Gavit – Kranti who was a daughter of their mother’s husband with another wife has been killed near Pune by half-sisiters

April 1991 to November 1996: 11 kids kidnapped by half-sisters and 8 of them has been killed and proven with the proofs by police

1998: Mother of half-sister and coach of all madding killing activities – Anjana died due to illness at age 50

September 9, 2004: High court also give same conclusion of criminal sister’s case, but clear them from the kidnapping and murder of one kid namely raja