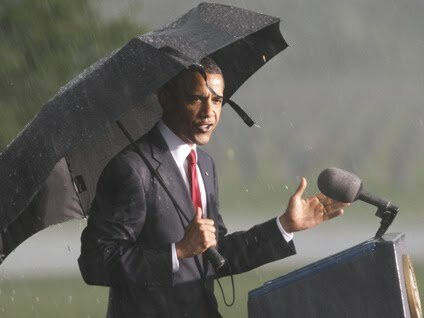 The President Barack Obama holding an umberalla in a heavy rain told to the horde, “Excuse me, everybody listen up. We are a little bit concerned about lightening. This may not be safe. So I know that all of you are here to commemorate the fallen and that’s why we’re here. What we’d like to do is, if possible, have people move back to their cars, and if this passes in the next 15-20 minutes, I will stick around and we’ll come up and start up the ceremony again. But we don’t want to endanger anyone, particularly children in the audience. So I’d ask everybody to very calmly, move back to your cars. I’m going to move back to mine. We will wait to make sure that the thunder has passed. A little bit of rain doesn’t hurt anybody, but we don’t want anybody being struck by lightning”. He also said “God bless you everybody. We will be staying here and will make an announcement shortly”.

In the ceremony’s administration building, Obama tried to wait out the storm. He went into a bus to meet the military families which had come for the ceremony. Barack Obama thanked the horde on the bus and wished everyone a “Happy Memorial Day.” 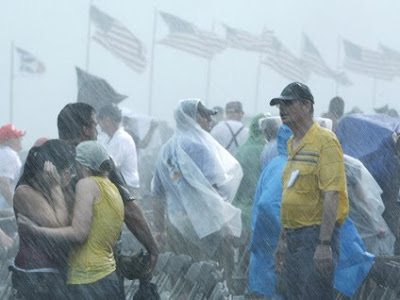 According to press reporter’s team,  the president made the decision himself to give the caveat to the crowd. As a result of the rainstorm, there were pools of water across the cemetery and the ceremonial garland the President placed among the grave sites had blown over from the storm.

“We were going to stay and see the president. We got rained out. The rain was terrible. It was really terrible. It turned out to be not a very good day,” said Westley Johnson.

Ryan Thompson told ABC7 Chicago “We don’t get this opportunity too often. So, we thought we would come out here and see our president, but it was a good time. It is kind of a rotten ending”.

Later it was clear that the event would not be started again and Barack Obama began the 50 mile drive back to Chicago. He made an unplanned visit to a veteran’s hospital on the way.