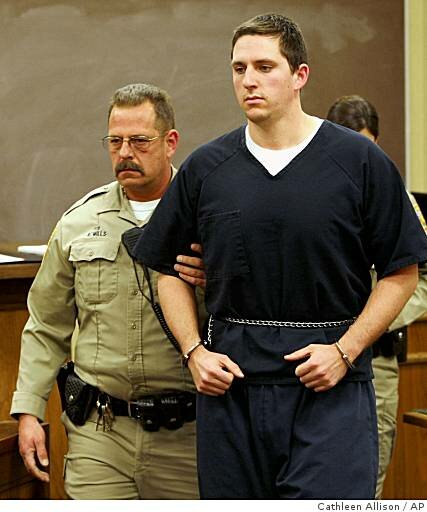 After a tense wait in the trial of Johannes Mehserle, a Los Angeles jury has found the former BART police officer guilty of involuntary manslaughter in the January, 2009, videotaped shooting death of an unarmed black man Oscar Grant, 22-year-old. Grant in the back as he laid face-down on the platform of Oakland’s Fruitvale BART station after an altercation broke out on a train. The defendant Mehserle pleaded not guilty, claiming that he mistakenly drew his gun instead of his electric Taser and shot Grant while trying to subdue him during a New Year’s Day 2009 confrontation. That triggered riots in Oakland, California last year.

Involuntary manslaughter typically carries a sentence of two to four years, although the judge could add 10 more years because a gun was used in the killing.

The event became particularly controversial because there were numerous videos captured by several bystanders and spread rapidly. It was clear that Grant was unarmed and lying prone when shot by Mehserle. As the public came to know of the crime by the police officer it became a far more serious rebellion against the authorities. The riots also caused severe commercial damages and became a racially sensitive issue. Today Johannes Mehserle might face charges of voluntary manslaughter and second-degree murder. The former can see him imprisoned for 11 years and the latter for 40 years. He might also be acquitted of the crime if proven not guilty. According to reports from the courthouse in Los Angeles, the involuntary manslaughter verdict, along with Meshlere’s additional conviction for the use of a gun in Grant’s death, could carry a sentence of 5 to 14 years.

Word of the Johannes Mehserle involuntary manslaughter verdict utterly transformed downtown Oakland in a matter of hours from a quiet enclave of office workers into a crush of more than 1,000 angry protesters, some of whom briefly skirmished with police.

It was reported that BART officers had only received their Tasers a few weeks before the incident. Also, during the trial, it was revealed that Mehserle received only minimal Taser training prior to the incident. He received the very bare minimum, which was six hours.

Last week, Los Angeles Superior Court Judge Robert Perry ruled that Mehserle could not be convicted of first-degree murder, saying that evidence in the trial proved that Mehserle did not plan to kill Grant by shooting him once in the back. 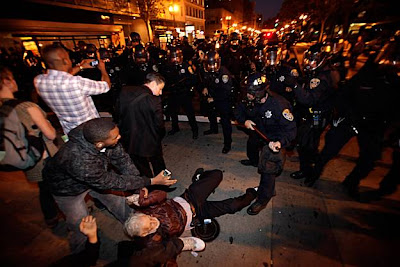 As of 4:30 pm, a small crowd of 50 to 100 people had gathered in Frank Ogawa Plaza in downtown Oakland. As word of the verdict spread via cell phone, Oakland resident Amber Royal, who said she lives in Grant’s neighborhood, burst into tears. “A man is killed in our city and he gets off with 6 years or whatever, that’s bullshit to me,” she said.

Nearby, another protester yelled “How involuntary is the pull of a trigger?”

At about 5:30 p.m., protesters surrounded police officers at 13th and Broadway and at 12th and Broadway, pelting officers with rocks and bottles and pulling down police barricades. Police quelled the disturbances quickly.

At 6:30 p.m., the crowd had grown larger, and riot police were present throughout the downtown, but the crowd at Frank Ogawa Plaza remained peaceful. Protesters filled Broadway from 15th to 12th, the majority of them simply chatting and taking pictures, although several people standing on crates delivered speeches to the crowd.

When a protest march became violent, law enforcement and city officials have taken precautions to prevent a repeat of the riots that erupted in the wake of the killing in January 2009. Demonstrators burned cars and trashcans and broke shop windows. Over 100 people were arrested. Several smaller riots erupted throughout the month of January, while Grant’s family pleaded for the violence to end.

In November, 2009, Alameda County Superior Court Judge Morris Jacobson granted a change of venue for Mehserle’s trial to move to Los Angeles, ruling that the violent protests and media attention in Oakland would not allow Mehserle a fair trial here.

During closing arguments, Mehserle’s attorney, Michael Rains, asked jurors to use common sense while deliberating. Why, he asked them, would his client intentionally kill a man he had never met before. There is that, and also the question of why anyone sane would do that in front of witnesses. Common sense would seem to point to a mistake.

Mehserle, who had been free on $3 million bond, showed no reaction as the verdict was read and was immediately taken into custody. Sentencing was set for August 6.

The panel of four men and eight women deliberated for about six hours over two days before reaching their decision, which indicated they essentially believed defense arguments that the shooting was a tragic accident rather than the intentional act of a rogue cop.

In a joint statement issued, Batts, Dellums and the members of the city council urged peace: “We are united as a city and a community, and we are dedicated to ensuring the safe expressions of emotions during this difficult time. We understand that the community is grieving, and we are in this together. We will get through this together. There are many people ready to help begin the healing process and they have opened their doors to allow us to express our grief in a healthy manner that will not endanger our safety, livelihood or reputation as a city. We are asking for the community to come together, look out for one another and stay safe. We will not tolerate destruction or violence. We live here, and we love Oakland.”

City officials are coordinating a peaceful citywide gathering at Frank Ogawa Plaza at 6 pm today that will feature youth speakers, music, poetry and other ways for community members to express their feelings. 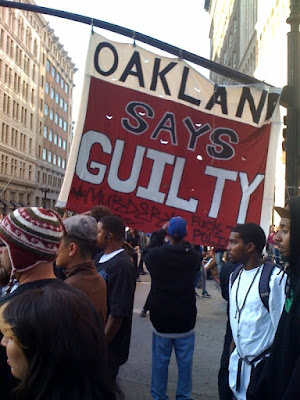 The groups Youth Uprising and the Urban Peace Movement are planning a 5 pm non-violent community event at the Youth Uprising office at 8711 MacArthur Boulevard in Oakland.

Other locations where youth are encouraged to gather to peacefully express their thoughts about the verdict include:

Officers were on alert as the situation deteriorated after dark with reports of a store being looted and several small fires being set. Streets in downtown Oakland and the city’s Chinatown area were deserted after workers went home early in anticipation of possible riots. The anger was directed at the involuntary manslaughter conviction — the lowest offense Mehserle faced.

The verdict followed a three-week trial in which prosecutors played the videos by the bystanders, and witnesses recounted hearing the frightening gunshot that killed Grant.

Mehserle testified that he struggled with Grant and saw him digging in his pocket as officers responded to reports of a fight at a train station. Fearing Grant may have a weapon, Mehserle said he decided to shock Grant with his Taser but pulled his .40-caliber handgun instead.

Grant has become a martyr of sorts in a city where more than a third of residents are black. His omnipresent image on buildings and storefront windows arguably rivals that of slain hometown rapper Tupac Shakur. The trial was moved from Alameda County to Los Angeles because of racial tension and extensive media coverage in Oakland.

Alameda County District Attorney Nancy O’Malley indicated that she was “disappointed and frustrated,” because “this was not the verdict we sought.”

O’Malley said, “The case is a tragedy in every respect. Oscar Grant should never have been killed at the hands of a sworn officer.”

The jury had a choice between murder and lesser charges of voluntary and involuntary manslaughter. The jury found that Mehserle did not mean to kill Grant, but that his behavior was still so negligent that it was criminal.

As a crowd near Oakland City Hall moaned and cursed when they heard the verdict, 23-year-old Amber Royal of Oakland said, “It’s not real, it’s not real. Where’s the justice? He was killed in cold blood.”
At the “Behind the Scenes” salon at 17th and Broadway streets in Oakland, hairdressers along with patrons gasped out loud when the verdict was read.

Grant family attorney John Burris said the family, too, was “extremely disappointed” with the verdict and also said, “This verdict is not a true representation of what happened to Oscar Grant. This was not an involuntary manslaughter case.” Burris contended that Mehserle should have been convicted of murder, saying it was like Mehserle “ran a light instead of killing someone.”

Grant’s family has filed multi-million dollar lawsuits against BART. Only the mother of Grant’s daughter has reached a settlement.

Gov. Arnold Schwarzenegger issued a statement urging Californians to remain calm and not resort to violence. Schwarzenegger said he had informed Oakland Mayor Ron Dellums that the state was well prepared to assist in maintaining order.

The Oakland police released the following statement: “We anticipate that regardless of the verdict reached by the jury, demonstrations could occur in downtown Oakland, and potentially throughout the city,” one of the messages said. “We will not tolerate destruction or violence. We live here, and we love Oakland. We understand that the community is grieving, and we are in this together. We will get through this together.”

Video of Johannes Mehserle is found guilty of “involuntary manslaughter” from Youtube: