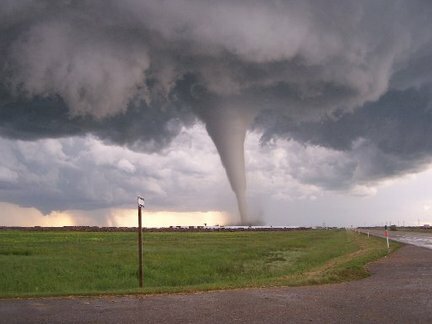 The New York City Office of Emergency Management advises to residents in the city that immediately go indoors and/or to the lowest floor of the building for shelter. In an emergency alert the agency said, “Stay away from windows.”

The warning affects for the New York districts of Queens, Brooklyn, Manhattan, and the Bronx. It also applies to Passaic County, northeastern Essex County, Bergen County, and Hudson County in northeast New Jersey.

A tornado, according to the National Oceanic and Atmospheric Administration, “is a violently rotating column of air that is in contact with the ground.”

A tornado watch remains in effect for many parts of the Tri-State area until 1 a.m. Saturday.

Sullivan County, New York is under a tornado warning. A stronger alert meaning a tornado has been sighted. Oppressive heat and humidity can be expected for these areas through the weekend. This warning is a rarity. The news has updated to include a “Supercell” in New Jersey.

Residents are given advice to stay near a radio or TV for weather updates. Make sure you have plenty of batteries, flashlights, candles, water, and food storage in case of temporary power seizures.

There were reports of intense lightning, strong winds and three-quarter inch hail in eastern New Jersey with downed wires, and there were are flood advisories in effect throughout the region.

N.O.A.A. stated that every year about 1,000 tornadoes hit the United States and killing on average 60 people. About 2 percent are recorded as force 4 or 5, the deadliest. The highest tornado wind speed ever recorded was 318 mph, measured on May 3, 1999 near Bridge Creek/Moore, Oklahoma. The greatest death toll came from the so-called “Tri-state tornado,” which killed 695 people along its 219 mile track through Missouri, Illinois and Indiana on March 18, 1925.