You are here: Home / Breaking / Megan Duskey- a teacher dead in fall from Palmer House stairwell 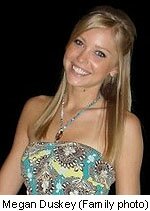 Megan Duskey got bachelor’s degree from Northern Illinois University in year 2009. Police says that she was enjoying a night for half an hour out with girlfriends on Saturday, 30 October when she playfully attempted to slide down a banister rail and fell down, resulted, her death. The south suburban Crete woman and her friends arrived at the Palmer House at 10:00 p.m. for the celebration and after half an hour, about 10:30 p.m., the accident occurred.

Justin Fullmer, who also attended the hotel party, said, “Everybody’s like, ‘oh, a girl just fell off the balcony.’ Everybody kind of freaked out.” Before Duskey fell, her friend from childhood, Ellie Pessetto had stepped away from the stairwell moments, and said, “We had just gotten there.” When Pessetto returned to the staircase, she observed two of her friends crumpled to the ground, in hysterics. Pessetto said, “I couldn’t even understand what they were saying,” and “Then someone said (Megan) fell.”

Pessetto said that when firefighters arrived, Duskey’s cousin had raced downward the staircase and was holding the body of Duskey. Afterward, a mark was noticed on the cousin’s arm which was occurred due to firefighters pull her away from Duskey. Pessetto said, “(The cousin) just said, ‘She’s gone.’ She knew she was gone“.

According to the medical examiner, she was died instantly due to head trauma. According to the police, alcohol was not a reason of the accident. With more than 2,000 guests, the party had been set to celebrate until 2 a.m., in which tables were reserved that cost over $1,000 apiece. Pessetto said that Duskey, a cousin, a college roommate and other close friends of Duskey got tickets from a friend, whose company had paid for a table.

Party guest Ben Clements said, “It seems like it was an area where not a lot of people could go to, very secluded or something like that. No one really knew where this girl had fallen,” and “It was quite shocking. We were wondering what was going on. Like I said earlier, we were trying to find, I tried to find, the nearest security guard, kind of ask him, you know, ‘What’s going on? Why is everybody evacuating the place?’ He really didn’t have any answers.”