On Wednesday July 7, 2010 Los Angeles Grim Reaper Serial Killer Lonnie David Franklin Jr. was arrested and charged with 10 counts of murder. David Franklin killed at least 10 women and 1 man. He only targeted black women and all time he used the same small caliber weapon for killing.

Across South Los Angele, when word of the arrest spread, neighbors and relatives of the victims began to gather near Franklin’s home, and a contradictory picture of the suspect emerged. Officials said, Lonnie David Franklin Jr. faces an additional count of attempted murder.

The case was named the “Grim Sleeper” case because the killer took long breaks between attacks. He is believed to be responsible for at least 11 deaths since 1985 in south Los Angeles. The killer targeted black women, some who were working as prostitutes, and he always used the same small caliber weapon. The criminal complaint charges Franklin only with the murders of the women, most of who were sexually assaulted. 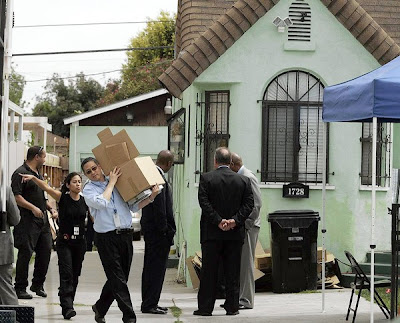 Margaret Prescod founded the Black Coalition Fighting Black Serial Murders and worked heavily with the families of the victims in the case. She told a CNN reporter that she spoke with the Grim Sleeper Task Force who informed her Wednesday that an arrest had been made.

Prescod said Detective Dennis Kilcoyne, head of the task force, told her that unlike a previous arrest in the case that turned out to be the wrong person, he was quite certain they had gotten their man this time. Prescod said, “He told me that what they have is very solid.”

Prescod told the CNN reporter that she has met with victims’ family members, who asked her many questions about Franklin’s arrest. Family members were instructed not to give any details about the case or speak to the media until officials hold a press conference on Thursday.

For well over two decades, the killer had eluded police. His victims, most of them prostitutes in South Los Angeles, had lived on the margins of society, and their deaths left few useful clues aside from the DNA of the man who had sexually assaulted them in the moments before their deaths.

A sweep of state prisons in 2008 failed to come up with the killer or anyone related to him. Then, last Wednesday, startling news came to the LAPD: A second “familial search” of prisons had come up with a convict whose DNA indicated that he was a close relative of the serial killer suspected of killing at least 10 women.

Working through the Fourth of July weekend, LAPD detectives drew up a family tree of the prisoner then began analyzing all the men on it. Were they the right age? Did they live near the murder scenes? Was there anything in their background to explain why the serial killer had apparently stopped killing for 13 years, then resumed in 2003?

Lonnie David Franklin arraigned in court on Thursday morning. The L.A. County District Attorney’s Office has charged Franklin with 10 counts of murder and with the special circumstance of multiple murders — making him eligible for the death penalty — as well as one count of attempted murder. He is expected to make a court appearance Thursday morning. 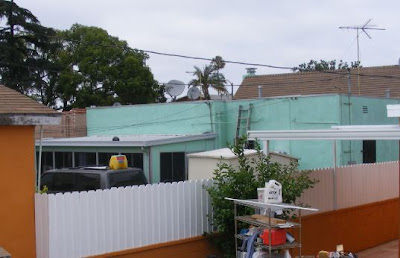 From that painstaking process, according to LAPD officials who requested anonymity, the prisoner’s father emerged as a likely suspect. An undercover team was sent to follow him; they retrieved a discarded slice of pizza to analyze his DNA. On Tuesday, they confirmed that it matched the DNA of the suspect in the killings.

Franklin is charged with 10 counts of murder in the deaths of Debra Jackson(29), Henrietta Wright(35), Barbara Ware(23), Bernita Sparks(age unknown), Mary Lowe(26), Lachrica Jefferson(22), Alicia Alexander(18), Princess Berthomieux(15), Valerie McCorvey(35), and Janecia Peters(25). He is also charged with one count of attempted murder, apparently stemming from the assault on the only victim who is known to have survived.

The L.A. Weekly dubbed the killer as “Grim Sleeper”.

Franklin was a garage attendant at the LAPD’s 77th Street Division station in the early 1980s, according to city and police sources. He worked as a garbage collector for the Los Angeles Department of Sanitation during the years that the first eight killings occurred, beginning with the death of Jackson on Aug. 10, 1985, and ending with the death of Alexander on Sept. 11, 1988.

On a tidy street of single-family homes in South Los Angeles where Franklin lived for decades, residents described him as a kind and compassionate neighbor who volunteered in the community, helped elderly residents of the block and fixed their cars for free.

Police swarmed Franklin’s pistachio-colored South Los Angeles home early today, arresting the grandfather they believe shot or strangled his victims before dumping the bodies in nearby alleys and covering them with trash or stuffing them in trash bins. One victim was found with a napkin placed over her face, scrawled with the word “AIDS”; another had been gagged with a rag. 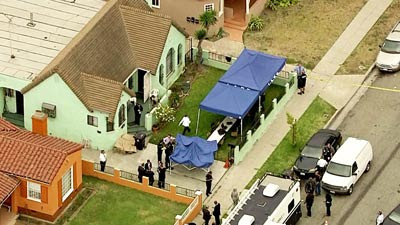 A blue tent was set up in front of Franklin’s house today as detectives scurried back and forth, collecting evidence. Many wore masks, causing CBS affiliate KCAL-TV to speculate that body parts may have been inside the home. Police has searched his house in hopes of finding more evidence.

The 47 year old, Eric Robinson, said, “A very good man. His daughter just graduated from college, I believe. He’s a good mechanic, worked out of his garage. I’ve been here since 1976 — that’s how long I’ve known him. I’m not pretty shocked; I’m all the way shocked.” Dante Combs said he visited Franklin last week to ask him to install a timing belt on his car.

“You needed your car fixed, he’d do it dirt cheap. He’d help you out however he could, cut your grass, put up your Christmas lights,” Combs said as he stood behind the yellow crime tape that sealed off Franklin’s block. “He helped all the elderly on the block.”

In the afternoon, families of Grim Sleeper victims began arriving on the block. Many of the killings occurred not far from Franklin’s home, and the family members said they needed to come to his home to bear witness.

Ray Santiago, 31, a neighbor who lives on 82nd Street, told the Weekly that although Franklin was “quiet” and “personable,” he “had a habit of talking about prostitutes.” Santiago recalled Franklin saying, “They’re good meat to work with and they never ask questions.”

He said that during conversations, if “any” woman walked by, like clockwork, Franklin would pause to take a long look. Santiago said he knew the suspect for three years.

“She was found on Western and 92nd, in a dumpster.” Diane McQueen said as she stood behind the crime tape, clutching a funeral program for her niece Peters, the last victim attributed to the serial killer. “It hit my family real hard. I had lost hope this day would come. I feel a lot of joy it did at last.”

“I wanted to see what his house looked like, what his neighborhood looked like, the place where he grew up,” Donnell Alexander brother of victim Alicia “Monique” Alexander.” It was curiosity. What I found was that it wasn’t far from where I grew up. His neighbors looked like the people I see every day. They weren’t aliens. And he wasn’t hiding in the community.”

Other neighbors told the Weekly he was known to have rented storage space at a facility behind a Big Lots store in Torrance, and that he sometimes brought another female neighbor along when he went there.

The Weekly on Wednesday broke the news of how authorities used “familial” DNA from the suspect’s son to catch the man they believe is the Grim Sleeper.

Later in the afternoon Brown, who’s running for governor, took credit for the 2008 change in state policy that allows detectives to use familial DNA to help track suspected criminals.

In announcing the arrests, Dist. Atty. Steve Cooley praised the LAPD and the California Department of Justice, which carried out the DNA “familial search” after Atty. Gen. Jerry Brown approved the use of the relatively new tool. Only California and Colorado have formal policies that permit the use of software to look for DNA profiles of possible relatives of a suspect.

Brown stated, “This arrest provides proof positive that familial DNA searches must be a part of law enforcement’s crime-fighting arsenal. Although the adoption of this new state policy was unprecedented and controversial, in certain cases, it is the only way to bring a dangerous killer to justice.

Video of Detectives Hit Wall in Hunt for LA Serial Killer from Youtube: