A wife of Singapore’s first prime minister and the mother of the island nation’s current prime minister, Kwa Geok Choo died on Saturday at age of 89. In her sleep, Kwa died around 5:40 p.m. at home. Last two year she had been bedridden after suffering from two strokes in May and June 2008.

Kwa Geok Choo was born on 21 December 1920 in well-to-do family. She met up with Singapore’s Minister Mentor, Lee Kuan Yew in the late 1930s when they studied at Raffles Institution where she was the lone girl in high school. Both had competed for the Queen’s Scholarship, which permitted recipients to study at either Cambridge or Oxford University.

During the school time, she was the top student in the subject of English and economics. Due to World War II, their college studies were interrupted, and Lee departed Singapore in 1946 to study at Cambridge after the Japanese left Singapore. Later a year, Kwa met him after winning the Queen’s Scholarship and they both graduated with law degrees.

Kwa got married with Lee in December 1947 and they had two sons and a daughter. She was mostly appeared with Lee at state events and on overseas visits. At the age of 87, Lee was admitted to Singapore General Hospital on Wednesday for treatment of a chest infection.

After a long illness, Kwa Geok Choo passed away on Saturday at the same time as her husband was taking treatment in hospital for a chest infection following a working trip to Europe. Singapore’s first prime minister, Lee Kuan Yew is a fitness buff who turned 87 on September 16.

According to statement from the Prime Minister Office, the wake will be held at Sri Temasek, official residence of the Prime Minister located within the Istana grounds, from October 4-5.
At the Istana government complex, Kwa’s body placed on Monday. So until the private funeral that scheduled on Wednesday, public members can pay their respects. Visitors can pay their last respects may do so from 10am to 5pm. Members of the public could contact on 6835 6614 for any inquiries.

On October 6, a private funeral will take place at Mandai Crematorium.

Outside the Istana, many peoples are awaiting for police’s security checking. After security checking, they boarded buses that ferried them to a British colonial bungalow at the top of a hill where Kwa’s body lay.

At the foot of her light brown coffin, a large colour portrait of Kwa’s smiling face was set and decorated with white and pink roses in a softly-lit room as visitors bowed and said quiet prayers in groups of 16.

Prime Minister Lee was dressed in a white short-sleeved shirt and black trousers and stood beside the coffin with his wife Ho Ching and recognized visitors with brief nods as classical string music played in the background.

A retiree whose family had owned a seafood stall that Kwa used to patronise, mourner Phua Lek Hia said, “I feel so sad… I cried when I heard the news that she passed on.”

Ordinary Singaporeans urged Lee who is generally famous as “MM Lee“. Lee said, “I cannot choose how I’m going to go. I just carry on my life and that’s that. If you start thinking about it, you will go downhill. Every day is a bonus, so let’s carry on.” 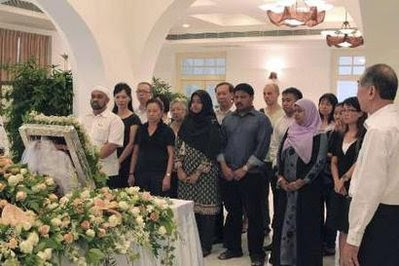 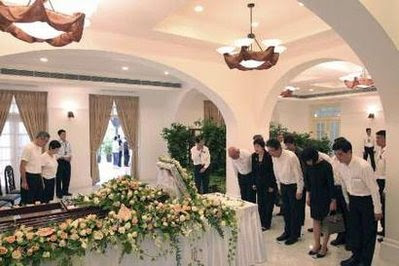 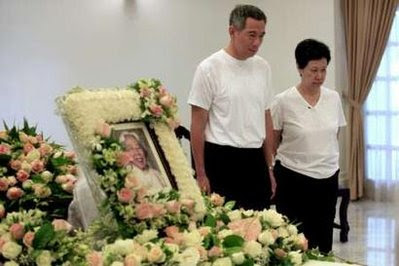 Tribute to Mrs Lee Kuan Yew – A Tower of Strength video from Youtube: