Getting confused whether the HUVr’s hoverboard videos are real or fake? Don’t worry, here are all the facts that you should know about HUVr Flying Skateboard video hoax.

Almost all of us fall in love with hoverboards after watching the 1989 movie, “Back to the Future Part II”. After so many years, flying skateboard featured in the movie has come true. A series of videos from a mysterious technology company called HUVr have gone viral on the internet. The company claimed to show the first ever real hoverboard. Thousands of people have convinced that this hoverboard is real, but there are many people who think it is hoax. So, take a look at the facts about HUVr flying skateboard to know whether it is real or a well-designed hoax. 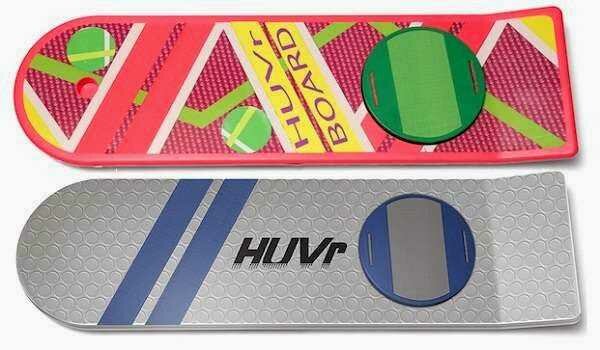 To make hoverboard more believable, the videos include famous celebrities like Tony Hawk, Agnes Bruckner, Moby, Terrelle Owens and Schoolboy Q riding the hoverboard. A visit to the HUVr website shows images of four different styles of HUVr hoverboards with optional handle bars. The company claims that hoverboards are super solid and have footpads that can be rotated up to 180 degrees.

It also says that there is a HUVr App to connect user’s smartphone to the hoverboard through Bluetooth for tracking route information like path, distance, speed, and travel time. The company claims that the hoverboard project started in 2010 at MIT’s Physics Graduate Program. You can view the team behind this project on the official site.

Despite of so many allegations that the video is a hoax, the company remains silent. In the General Terms and Conditions section of the website, you can find a disclaimer that “the inclusion of any products or services on this website at a particular time does not imply or warrant that these products or services will be available at any time.”

HUVr Is a Real-Life Hoverboard

In the videos, there are no long, wide shots of the hoverboard during usage. So, it might be possible that wires are used to fake this type of hoverboard tech. In the video, viewers can clearly see a harness on the celebrities in the shadow, even though it has been digitally removed. Another thing that proves this product is a hoax: one of three videos of hoverboard talks about an iPhone and Android app which can power/control the hoverboard. No app can do something like this.

HUVr Could Be a Lucrative Hoax

HUVr could be an elaborate prank by a comedian, a marketing stunt, video game/app promotion, a new Back to the Future movie or an April fool’s prank. The time gauge on the official website shows December 2014 as the “Destination”. December is a popular time to release films and there are rumours about Back to the Future IV, so it could be a movie.

Hoverboard Technology Is Not PossibleYet

Tony Hawk Might Be Using HUVr as a Marketing Tool

There are many evidences that show it is a part of a Guerrilla Marketing Campaign for Tony Hawk’s new game. Right now, the only thing that links Tony Hawk to HUVr is the appearance of Tony Hawk in the video.

All celebrities in the HUVr videos are famous, except two: Schoolboy Q and Agnes Bruckner. So, it might be a publicity stunt to raise public awareness of these less well-known celebs a little bit.

In just 3 months, there have been number of hoax products in 2014. HUVr is among the biggest hoax products of 2014 that are harder to believe. One such 2014 hoax was the “Celebrity Salami”, a company that claimed to make meat products from cells cultured from the bodies of famous people. Other hoaxes of 2014 are the backlash hoax and the Talking Angela hoax.

On March 4, HUVr Flying Skateboard was among the most-searched terms. Hence, you can see many people in your Twitter and Facebook feeds talking about the HUVr videos.

The HUVr is undoubtedly very expensive hoax. Despite of so many allegations that the video is a hoax, the company remains silent. In the General Terms and Conditions section of the website, you can find a disclaimer that “the inclusion of any products or services on this website at a particular time does not imply or warrant that these products or services will be available any time.”