You are here: Home / Breaking / Heavy rain in Valsad: Flood Condition to be expected

Heavy rain in Valsad: Flood Condition to be expected

From the 10th July, 2013, a continuous rainfall has disturbed the routine life of locals of Valsad. Heavy atmosphere pressure is created in the weather of Valsad district and around 22 inches of rainfall has been recorded by the Weather department of Valsad district. On the roads of Valsad, nearly 4 feet rain water has accumulated and it has created the situation of complete road transportation failure. In the lower areas of Valsad, high alert has been announced and more than 70 families have been shifted on the higher places to reduce the chances of death. 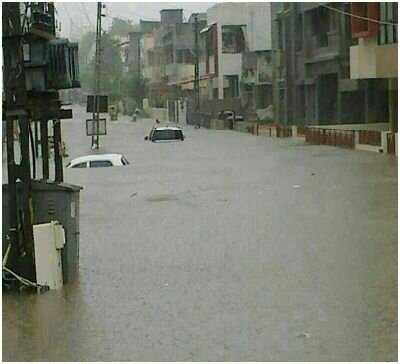 In the residential area namely “Dhobi Talav”, 3 houses are totally destructed due to heavy rainfall. “Auranga” river and many other small rivers are totally accumulated with rain water and there are many chances that if the rain will not stop, then flooding situation may arise in the Valsad district. Re-test of standard 10th has been cancelled due to heavy rainfall and holidays are declared in the Schools.

Even Mumbai Central-Ahmedabad Gujarat Express has been stopped at Vapi, Shatabdi Express is blocked at Udvada. Disaster team of Valsad District is on high alert as weather department has announced the chances of heavy rainfall in next 48 hours.

Videos of Heavy rain in Valsad in 2013