In some parts of the East, New York City, Meteorologists say temperatures could reach as high as 102 degrees Tuesday so New York City plans to open several hundred cooling centers in air conditioned public buildings. An excessive heat advisory with forecasters expecting more advisories was given to several Northeastern cities including Philadelphia and New York City to come as the humidity levels gradually increase. 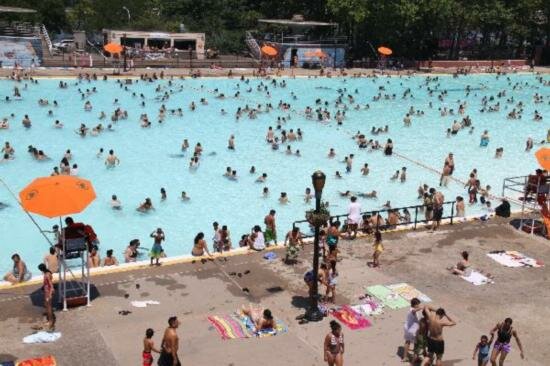 About 17,000 Northern New Jersey residents lost power for more than four hours on Monday. The outage forced customers out of Grant Halliday’s overheated restaurant. “We can’t cook. We have no air conditioning. All the refrigeration is down,” said Halliday. Dr. Alton Barron of St. Luke’s Hospital said, “they have less ability to tolerate the extremes of temperatures, the extremes of dehydration”.

According to reports Monday, “Weather forecasters predict a historic heat wave to strike areas of the Northeast, saying prolonged temperatures in the triple digits could be the catalyst for a hazardous situation.” Until Wednesday evening, the Philadelphia metropolitan area has been issued several excessive heat advisories. A heat advisory has been in effect since 2 p.m. Monday until 6 p.m. Tuesday in New York city. Depending on the increase in humidity and weather patterns, reports stated, additional heat advisories may be issued for New Jersey, northeastern Maryland and central and south Delaware.

People are advised to stay hydrated by drinking lots of fluids, stay inside out of the sun, and to check up on neighbors and relatives by the National Weather Service. With temperatures possibly reaching 102 degrees, Tuesday is expected to be the hottest day of the heat wave. According to the NWS, “a heat wave is a stretch of temperatures upwards of 90 degrees.” A heat advisory warning was issued by the National Weather Service to residents of the region that the elevated temperatures and high humidity could prove dangerous, particularly for young children and the elderly.

In New York City and Philadelphia, “Excessive heat” advisories also were posted in New York City and Philadelphia, where authorities opened “cooling stations” — air-conditioned buildings where residents can get out of the heat. Residents were warned by the NWS to drink plenty of fluids, stay in an air-conditioned room, stay out of the sun and check up on relatives and neighbors. “Parts of the Middle Atlantic region, which already has had several bouts of uncomfortably hot weather this year, are experiencing the warmest spring on record,” said by Meteorologist. Forecasters said, “the heat wave was likely to spread down the east coast as the days wear on.” “Southern locations will feel the inferno later in the week,” said Alex Sosnowski, a meteorologist with Pennsylvania-based Accu-Weather, a private firm.