The worst oil spill in the U.S. history is still an issue, as BP’s effort to stop it ended in the failure on saturday. BP was unable to overwhelm the gusher of crude with heavy fluids and junk.

The oil giant immediately began readying its next try to fix, using robot submarines for cutting  the pipe that’s gushing the oil and cap it with funnel-like device, but the only guaranteed solution remains more than two months away. 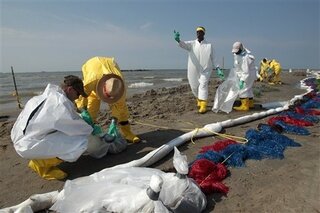 The company determined the “top kill” had failed after it spent three days pumping heavy drilling mud into the crippled well 5,000 feet underwater. It’s the latest in a series of failures to stop the crude that’s fouling marshland and beaches, as estimates of how much oil is leaking grow more dire.

The spill is the worst in U.S. history — exceeding even the 1989Exxon Valdez disaster — and has dumped between 18 million and 40 million gallons into the Gulf, according to government estimates.

“This scares everybody, the fact that we can’t make this well stop flowing, the fact that we haven’t succeeded so far,” BP PLC Chief Operating Officer Doug Suttles said Saturday. “Many of the things we’re trying have been done on the surface before, but have never been tried at 5,000 feet.”

Frustration has grown as drifting oil closes beaches and washes up in sensitive marshland. The damage is underscored by images of pelicans and their eggs coated in oil. Below the surface, oyster beds and shrimp nurseries face certain death. Fishermen complain there’s no end in sight to the catastrophe that’s keeping their boats idle.

News that the top kill fell short drew a sharply worded response from President Barack Obama, a day after he visited the Gulf Coast to see the damage firsthand.