You are here: Home / Breaking / Gliese 581g – A Earth like planet discovered by Astronomers

Gliese 581g – A Earth like planet discovered by Astronomers


Astronomers have discovered a planet of similar size to Earth in orbit around a nearby star called Gliese 581g, which is located in prime real estate within the constellation Libra.

The discovery of the most Earth-like planet with about three times the Earth’s mass orbiting the nearby red dwarf star Gliese 581g has been announced by the astronomers. The planet lies in the star’s ‘Goldilocks zone’, the region where liquid water could exist on the planet’s surface. In cosmic terms, the new planet is virtually our next-door neighbor. It circles a dim red star, Gliese 581 that’s only 20 light-years away. It also appears to have an atmosphere, gravity like our own and could well be capable of life. 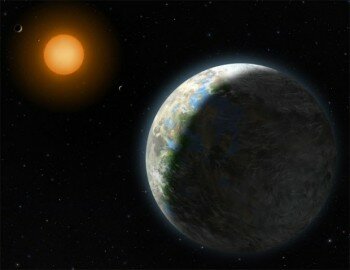 This new planet takes 37 days to orbit the star once, and orbits at a distance about 1/6 the distance of the Earth from the Sun. The researchers will report in an upcoming issue of the Astrophysical Journal that Gliese 581g contains only about 30% of the sun’s mass and shines with only about 1% of its brightness.

Professor Steven Vogt said, “Our findings offer a very compelling case for a potentially habitable planet.” He added, “The fact that we were able to detect this planet so quickly and so nearby tells us that planets like this must be really common.”

The Gliese 581g planet is tidally locked to the star, means that one side is always facing the star and basking in perpetual daylight, while the side facing away from the star is in perpetual darkness. The average surface temperature of the planet estimated by researchers is between -24 and 10 degrees Fahrenheit (-31 to -12 degrees Celsius). Real temperatures would vary from blazing hot on the side facing the star to freezing cold on the dark side. Prof Vogt said, “The surface gravity would be about the same or slightly higher than Earth’s, so that a person could easily walk upright on the planet,” “It may well be like Earth, where you could walk around comfortably and look out at the stars.”

There is no evidence that Gliese 581g holds oxygenated landscapes of green and blue that would support microbes, dinosaurs or some alien-looking pre-human, said by the Scientists. The conclusions result from 11 years of observations at the W.M. Keck Observatory in Hawaii, where old-fashioned telescopes and advanced math are leading the exoplanet search.

Steven Vogt of the University of California, Santa Cruz (UCSC) and Paul Butler of the Carnegie Institution of Washington team led the discovery. UCSC associate research scientist Eugenio Rivera, Gregory Henry and Michael Williamson of Tennessee State University are other team members. Vog said, “The number of systems with potentially habitable planets is probably on the order of 10 or 20 percent, and when you multiply that by the hundreds of billions of stars in the Milky Way, that’s a large number. There could be tens of billions of these systems in our galaxy.”

Video of New Planet: Another Earth discovered by scientists? from youtube: