You are here: Home / Breaking / Colombian Mine Explosion‎ : Blast Kills 20

In a Colombian coal mine explosion, at least 20 miners were killed, and dozens are still missing. An explosion was held on Thursday in a Columbian coal mine, just south of Medellin. “As of Thursday afternoon 18 bodies have been found, but at least 53 miners are still trapped,” according to Colombian media. The tragic incident took place in the San Fernando-Mine, in the mountainous area of Antioquia, President Alvaro Uribe expressed his “pain” over the tragic incident. An blast caused the collapse of a 1.3 mile-long shaft that usually provides access to a depth of 500 feet. Over 70 Colombian miners are feared dead after an explosion trapped them in a coal mine and could become one of the Andean country’s worst mining disasters. The death toll was predictable to increase steadily as rescuers struggled against gas and debris to reach into the mine shift. 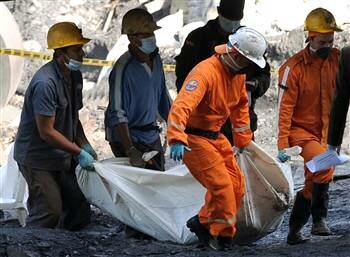 A large concentration of methane gas hampers the rescue. A special army unit in finding the trapped miners is assisting over 100 rescue workers. When shifts were changing, the explosion occurred. between 70 and 80 miners were down in the mine at a depth of 600m to 700m, at the time of explosion. Two wounded miners were able to arrive at their own protection. So far only one miner has been found alive, and all victims were severely burned by the explosion. Shocked relatives cry and hugged each other waiting for news and anxiously pressed rescue workers for details as hearses ferried bodies from the blast wreckage. 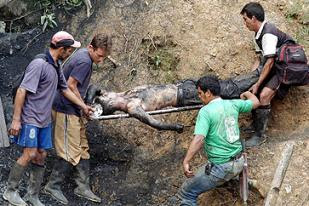 President Alvaro Uribe said, “This is a huge tragedy, initially we have reports of 72 people trapped and now we have 16 bodies recovered”. Rescue workers on the ground said, “A new accumulation of gas temporarily halted attempts to reach miners trapped deep below the ground.” Gladys Gallego said, when she waited for a loved one outside the mine, “They have to give me some sign of hope,” and “Until they take him out I am not going home.” A disaster official, Luz Amanda Pulido said, “There was little chance any miners would be pulled out alive after the blast, which President Alvaro Uribe called a “huge disaster.”” 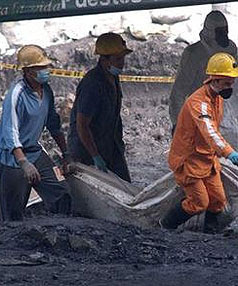 Rescue agency director Ivan Dario Viera told Reuters by telephone, “We’ve recovered 18 bodies and the rescue is difficult because the mine is still leaking a lot of gas,” and “The operation could take four or five days minimum.” Officials said, “At least 20 miners were killed and more than 50 others remain trapped after a large gas explosion ripped through a coal mine in northwest Colombia on Thursday.” President Alvaro Uribe said, “This is very sad news. A lot of pain comes with this news,” he requested the Antioquia Department of Mines to promptly report if the coal mine had been inspected and complied with all safety laws.