Former Oakland Raiders, Jamarcus Russell was arrested in Mobile, Alabama on Monday for Codeine Syrup Possession. According to sheriff’s spokeswoman, 24 years old Russell was arrested at his home early this afternoon during an undercover investigation. He was booked into the Mobile Metro jail and released on $2,500 bond. Previously, Russell was selected as number one over all in the 2007 N.F.L. draft. 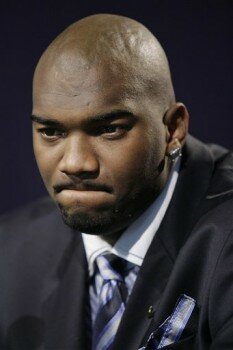 What is “Codeine Syrup?”

Codeine syrup is described as medicinal drug that is also used to get high. The reason Jamarcus Russell was arrested was that he did not have a prescription for its use in his possession. It’s the main ingredient in what’s called “Purple drank,” a slang term for “a recreational drug popular in the hip hop community in the southern United States” according to Wikipedia.

Used to quiet coughs and provide pain relief for people who can not swallow pills, codeine syrup is a controlled substance and has to be prescribed by a doctor. Evidently, the codeine syrup in Jamarcus Russell’s possession was not his or prescribed for him. This is unclear that how much codeine syrup was in his possession. Was it enough to sell, or possibly just enough to keep a bad cough under control? Can Russell not swallow pills or smoke pipes? This is such a weird arrest. According to the New York Times, Russell was arrested at his home as the result of an undercover investigation.

This really sucks for Russell, who was already in trouble trying to get a job with a football team. Police did not find a prescription for the codeine during their search, spokeswoman Lori Myles said. JaMarcus had codeine cough syrup, which can be mixed with soda to make “purple drank”.

Russell is scheduled to appear in court on July 20. A bond hearing is set for July 7.

The USA Today is reporting that Russell is due in court on Tuesday, July 20 and he was released after posting $2,500 bail. Russell and his agent did not immediately return calls for comment.

Russell played high school football at Williamson High School in Mobile. He played quarterback for LSU from 2003 to 2006 and was the No. 1 draft pick for the Raiders in 2007. Russell went 7-18 as a starting QB. The Raiders released Russell last May.

The Raiders released Russell, considered one of the NFL’s biggest draft busts, in May after he won only seven of his 25 starts and was benched. He completed just 52.1 percent of his passes in his career with 18 touchdowns, 23 interceptions, 15 lost fumbles and a passer rating of 65.2.

Oakland paid Russell about $36.4 million through the 2009 season. Since the start of the common draft in 1967, only one other No. 1 pick was released this quickly in his NFL career. Indianapolis cut 1992 top pick Steve Emtman after three seasons, but that was more because of injuries than production.

Sportswriter Jerry McDonald, who covers the Oakland Raiders for the Bay Area News Group, responded to Russell’s arrest by tweeting, “Wish I had a dollar for every time I got an e-mail or a tip about Russell and prescription couch syrup …” McDonald elaborated further by saying, “JaMarcus the second highly-paid Russell who lost career to party scene. Darrell Russell paid the ultimate price.”