CTA spokeswoman Catherine Hosinski said a “small fire” started on the tracks near the Chicago Avenue station and power was removed about 5:10 p.m. She said the fire was extinguished “within minutes”. Meanwhile, Subway trains near the affected areas have been re-routed to elevated tracks. Fire officials say most of the injured had with respiratory problems.

Fire Media Affairs spokesman Richard Rosado said the fire was started on the railroad ties at 4:58 p.m. An extra-alarm and EMS Plan II — which automatically sends at least 10 ambulances — was called at 5:18 p.m. and 100 emergency personnel from 32 units responded. The sufferers were being treated for smoke inhalation at hospitals named Northwestern Memorial and Stroger Hospital of Cook County and all of those who were seriously injured were adults, Langford said. 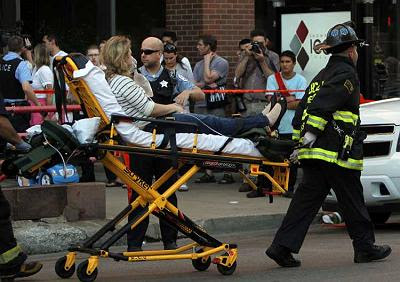 Some seated beside him began to cough and choke, and Schad put up the rim of his collar to cover his mouth. By the time the train reached the next stop at the Clark/Division station, so much smoke had consumed the underground station that passengers were fleeing for the exits. According to Fire Department spokesman Larry Langford, five people were being taken to area hospitals in serious-to-critical condition; three were taken in fair-to-serious condition; and 11 were transported in fair-to-good condition.

Schad, 23 said, “We were given no instruction. We didn’t really know what was going on“, “I never saw flames, but there was a lot of smoke. Visibility was really bad.” Passenger Dillon Johnson, 23 said, “The smoke was so thick you couldn’t see across the aisle“, “We all started to sit down on the floor where the smoke wasn’t as bad.”

Sang Shin, 22, was on the north bound Red Line train Sunday when the fire broke out. He said the train stopped between the Chicago Avenue and Clark and Division stops with no explanation from the train operator. He said passengers around him were holding t-shirts to their noses to keep from inhaling the thickening smoke. 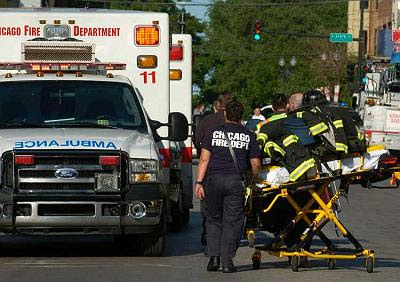 Chris Babashka, his 8-year-old son and his wife had just boarded the northbound Red Line train at State and Lake, headed their home in Andersonville, when the train operator announced that another train was in front of them. The three were sitting in the front seats behind the operator’s cabin when smoke began filling the car between the Chicago and Clark/Division stop, Babashka said. “I would say that it was chaos to say the least,” Babashka said. A few people began banging on the operator’s door; others huddled down on the floor with shirts over their mouths. Many dialed 911.

Once the three got above ground, the family walked to the nearby Jewel store and cleaned up in the restrooms. “Our faces were covered with black,” Babashka said. Babashka said he’s pleased with the fire and police departments’ responses. But he’s concerned with how the CTA handled the situation. Had the train operator stayed behind at Lake, they could have avoided the smoke, Babashka said. He also added, “We just had to sit there, we were somewhat helpless“.