At least 45 people have been killed after a bus overturned in Cameroon during an overnight journey after rolling down a hill. 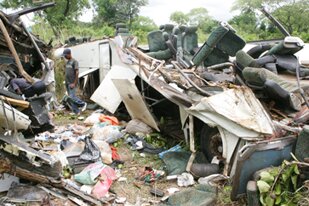 District official Mamadou Balla says the driver was apparently dozing while the bus was travelling at top speed. The vehicle, which was carrying about 60 passengers, overturned at a sharp turn in the road.

“At the scene we’ve identified around 30 bodies but the death toll could be much greater given that some of the injured evacuated before we arrived reportedly died,” Fifen Idrissou, a traffic police official, told the AFP news agency.

“The bus lost control … 200 metres further on the bus hit a ditch. It rolled over several times,” Idrissou said.

The bus was travelling to the capital of Yaounde when it crashed in Etoundou village, about 80 miles north-west of the capital.