You are here: Home / Breaking, India / Bus overturns in Karnataka, 30 charred to death

30 people, including 10 children and 15 women, were charred to death and more than 25  injured when a Karnataka roadways bus overturned and burst into flames near Challakere area in the district early morning on Sunday.

The mishap in which 5 men were also burnt alive, occurred at around 2.30 am about 40 kms from here, police said. The state transport minister, Mr R. Ashok, told reporters that according to preliminary reports, the driver’s “negligence” could have caused the accident.

“A total of 30 passengers have died in the bus accident,” the district superintendent of police, Mr Labu Ram, said.
Police suspect that the driver of the NEKSRTC  (North-Eastern Karnataka state road transport corporation) bus, bound for Bengaluru, might have dozed off and hit a barricade. The bus overturned and its diesel tank caught fire, engulfing the entire vehicle. 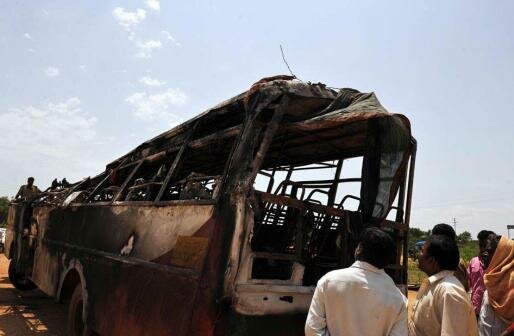 While four of the nearly 60 passengers managed to jump out of the bus, 25 others were rescued and admitted to hospitals in Challakere, the SP said. Three of the injured were in a serious condition and have been shifted to a government hospital in Chitradurga.

Police said nine bodies have been identified so far and they planned to conduct DNA tests on several others as they were charred beyond recognition. Messages have been sent to the relatives of victims in Surapur in Gulbarga district from where the bus had begun its journey.

NEKSRTC has announced a compensation of Rs 2.5 lakh for next of kin of the deceased. The Chief Minister, Mr B.S. Yeddyurappa, has also announced Rs one lakh compensation for the families of the dead and Rs 25,000 for those injured.