You are here: Home / Breaking / Bank and Auto Strike in Mumbai today

Today, the Auto and bank are on strike in Mumbai. This strike affected many commuters and they are facing big trouble for their places of work which is a part of the public transport section. Across the Mumbai, more than 1, 00,000 auto rickshaws and 1,000 of taxis went on strike for objection against the rising price of necessary commodities, job losses and state asset sales. The Auto Strike did not affect to state transport buses and local trains. Most of banks, auto, taxis, air traffic, factories and other different government offices shut due to the daylong strike. 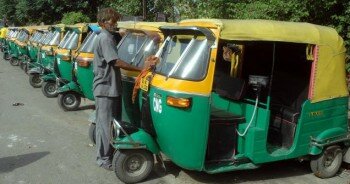 Mainly in the western and eastern areas, auto rickshaws stayed off the road in the southern area of Mumbai. BEST buses were running with high occupancy for the people who tries hard to reach the nearest suburban railway station to catch a train to their work place. The police authorities stated that there were no any rebellious taking place recorded in the city and the situation was settle down. Shops and commercial establishments, hotels and eateries started opening for the day in early morning of today 7th September.

Mumbai Auto Rickshaw Union president Sharad Rao said, “The government must realise that common man is burdened with rising prices of essential commodities like vegetables, oil and others. There is a phenomenal increase in inflation. To protest against this about two lakh Automen and thousands of Taximen will go off the streets today.”

President of Mumbai Taximen’s Union Anthony Quadros said that taximen have already suffered from the four strikes in the last three months. He said, “We are not going on strike this time but we do extend our moral support to the cause. Also, this a festive season and we do not want to cause inconvenience to commuters.”

Eight foremost trade unions, including Congress-affiliated AITUC, CITU, HMS, AIUTUC, TUCC, AICCTU, UTUC and other industry federations has give the lockdown call for disputing uncontrolled price rise, large number of job losses in the name of depression, large-scale violation of all labor laws and disinvestments in public sector undertakings.

Secretary of All India Bank Employees Association (AIBEA), Vishwas Utagi said, “Expansion of public sector banks network is necessary for reaching out to the poorest of the poor for making the financial inclusion model of the RBI a success. We are protesting against price rise, violation of labour laws and disinvestment in public sector undertakings.”

He also said that 30 trade unions confederations whole heartedly participated in the strike. All the bank staff was detained from work and hence the entire banking functionality was disturbed from the branch till the head office level.

There are 27 public, 26 private, 18 foreign, 82 regional or rural and 1,721 co-operative banks have joined the nationwide strike. Approximately 10 lakh bank employees are expected to stay off work.

Expectedly, the bank strike is hitting the banking process and capital market transactions. The main banks such as HSBC Bank, Standard Chartered, Citibank, ING Vysya Bank, Federal Bank, Karnataka Bank, Bank of Maharashtra, and Nainital Bank are also including in the strikes. It is alleged that three private banks such as Axis, HDFC, and ICICI are not taking part in the strike.

The strike is not only affected to Mumbai people where the common man was wrongly strike as autos and taxis stay off the road, but it is also affected to other states of the India. In Delhi, there are 14 autos unions out of the 50 participated in the strike which was being trouble for people in the city, mostly in Anand Vihar, Old Delhi and New Delhi railway stations and south Delhi areas.