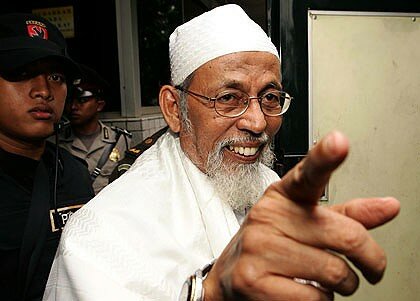 Indonesian police say 71-year-old, Abu Bakar Bashir was actively involved in a terrorist training camp uncovered in the Indonesian province of Aceh this year and appointed the notorious terrorist Dulmatin as field commander.

The radical group, Jemaah Ansharut Tauhid has been linked with alleged plans to kill Indonesia’s president.

His lawyer Achmad Michdan said that Bashir was detained this morning with his wife, his driver and another woman as he drove from West Java back to his home near Solo in Central Java.

Bashir has not yet been formally charged. Under Indonesia’s anti-terror laws police can question him for up to a week without filing charges. More than 70 alleged terrorists have been arrested or killed in relation to the cell, which planned to assassinate Indonesian President.

It is understood members of the Indonesian counter-terrorism police, Detachment 88, were involved in the detention of Bashir, who had been under close surveillance for at least three days.

National police spokesman Edward Aritonang told reporters today in Jakarta that Bashir was taken into custody in connection with a larger plot to bomb foreign embassies and police headquarters. He said Police are searching for a French national with a Moroccan wife who may be involved.

Before being cleared of involvement with Jemaah Islamiah (JI) that group behind the 2002 Bali attacks, Bashir had served 26 months in jail.

Bashir was imprisoned for conspiracy over the bombings, in which 202 people died. However, his conviction was overturned and he was released in 2006. He has been taken charge of giving spiritual leadership to JI, which has links to al-Qaeda – a claim he denies.

According to Analysts, it is unlikely Bashir arrest will affect the day-to-day operation of terror cells in the country.

He has continued to be a figure of controversy since his release, praising violent Islamists and calling for the establishment of an Islamic caliphate in Indonesia.

Officials say he helped set up and fund an Islamic radical training camp in Aceh which was exposed by police in February.

Sidney Jones, senior adviser to the research organization’s Asia Program, said by telephone, “It’s good police work, no question, but it’s also been very stupid missteps and miscalculations on the part of the groups involved.”

Most believe that Bashir provides moral and spiritual justification to extremist groups, giving them his religious approval, but that he is not involved in planning or execution of terror attacks.

While it would be fair to say that most Indonesian Muslims equate Bashir with extremism because of his radical rhetoric, his arrest could create a wave of public sympathy among some Indonesians who, seeing images of an elderly man arrested and possibly put behind bars, may feel he is being treated unjustly.

The head of Indonesia’s anti-terror unit, Ansyaad Mbai told the BBC that Bashir was detained on terrorism charges.

Mbai told to reporters, “He had been involved in terror network in Aceh. As we know, that terror group in Aceh is linked with Jemaah Islamiah and many other extremist groups in our country.”

He also said, “One of the allegations is that he provided funding to the Aceh military training camp. It’s one of many allegations weighed against him.”

The BBC’s Karishma Vaswani in Jakarta quoted police as saying that Bashir played an active role in setting up the camp, appointing key people and receiving reports from extremists in the field.

According to BBC’s reporter, these are very different allegations being leveled against Bashir, who has been linked to extremism in the past in a spiritual and moral capacity but not in the planning or creation of a terror network.

Arriving at Jakarta police headquarters, Bashir said: “This is God’s grace to reduce sin. This is engineered by America.”

Abdul Rohim, a son of Bashir appealed for the fair treatment of his father and said his mother had also been detained. His son said, “We appeal to police to treat my parents well. He is innocent, he was just carrying out his obligations as a Muslim.”

Bashir is believed to be the leader of the hardline Islamist group Jemaah Ansharut Tauhid (JAT), which was created in 2008.

It was recently described in a report by the Brussels-based think tank, International Crisis Group as an “above-ground organisation” that embraced individuals with known ties to fugitive extremists.
In the month May, Police raided JAT headquarters in Jakarta and arrested three of Bashir’s followers.

They were charged with having links to the training camp in Aceh, the International Crisis Group said. Bashir denied having any links to the group or the camp.

Officials consider that JAT had plans to launch an attack at Independence Day celebrations on 17 August, which are attended by the president.

The planned assault was said to be similar to that seen in Mumbai, India, in November 2008, when Islamist militants killed 166 people. JAT has denied it has any connection to extremism and insists it is a legitimate Islamic organisation.