You are here: Home / Breaking / A Man in 2 month snow-covered car survived

It’s hard to believe that a man lived for 2 months in a frozen car, eating snow. But, a 44-year-old Swedish man named Peter Skyllberg has made this possible. He was trapped in the snow-covered car for 2 months, and he has somehow survived by drinking melted snow without food for a full 60 days. Peter Skyllberg was found by passersby on 17th February at snow-filled forest road over 1 km from the main road in northern Sweden. Initially, passersby considered that the car was a wreck but they noticed movement inside the car when they dug their way. 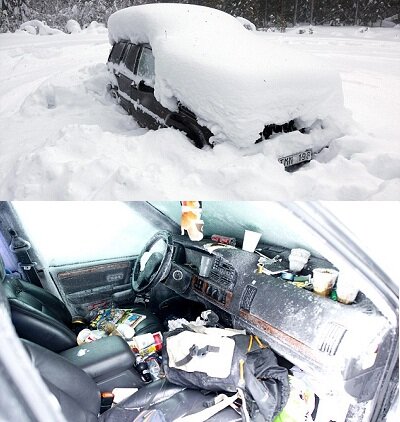 When he was taken out from the car, he was very weak and in a very bad condition, huddling in a sleeping bag on the rear seat. He was also awake and able to communicate at that time. He was taken to the Noorland University hospital without any delay and now he is recovering. As per Peter Skyllberg, he was in the car from 19th December, 2011. The temperature outside had been -30C. Peter Skyllberg has refused to be interviewed and only wants everybody to know that he is better now.

Images of the vehicle’s interior appeared to show dashboard and seats covered in ice as well as empty food and drink wrappers. Wrappers signify that he was having some supplies with him. Police and doctors were surprised to see how a man could survive for 2 months in temperatures as low as -30C without food. As per doctors at hospital, a person can survive without food for 1 month if he has water to drink, but if a person has body fat he can survive even longer.

Doctors think that Skyllberg survived by going into a kind of human hibernation while other doctor said that the snow-covered car might serve as an igloo. The two main things for his survival are warm clothes and sleeping bag. Some people think that Peter Skyllberg is trying to take his life as he had about £150,000 debt and had broken up with his girlfriend.