You are here: Home / Breaking / 200 Death Due to Cholera in Haiti

200 Death Due to Cholera in Haiti

Epidemic of cholera has killed 200 people in Haiti and so it becomes a major concern for Haiti‘s people health. More than 2,000 people take treatment for Cholera in and out Saint-Marc hospital. In this current year, it is another trouble for Haiti after facing earthquake that took more than 3, 00, 000 lives nine month ago and turned Haiti into an unimaginable hell. 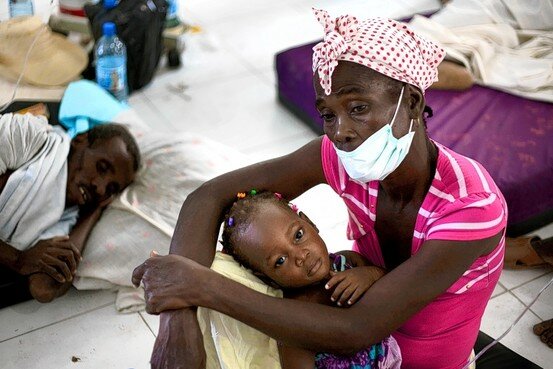 Aid Organizations have deployed medical teams and supplied clean water to the outbreak zone around Saint-Marc in the central Artibonite region, and to the Central Plateau where over 150 deaths and 1,500 were ill from late Friday.

The cholera’s first 2 cases were confirmed from the outside of central Artibonite region on Friday. In Croix-des-Bouquet, experts were also investigating potential cases, and according to radio reports, there were also two dozen cases of diarrhea confirmed on Gonave Island.

Cholera is bacterial disease caused by contaminated drinking water. Cholera is included in a major reason of death in the world.

The essential actions are taken by officials to confirm that the disease does not spread in outside the Artibonite and Central Plateau regions. There are many people hospitalized due to cholera in which a person also suffers from diarrhea, acute fever, severe dehydration, and vomiting.

The health officials are worried that if the epidemic of Cholera would spread in the January’s earthquake survivors who are living in camps, then the cases of death may raise.

The cholera epidemic began near the small town of St. Marc where increasing numbers of ill patients were admitted at the St. Nicholas hospital on Tuesday. On Thursday, more than 500 cholera cases and 12 deaths were reported. The whole hospital is full with such cases and more and more sufferers are admitting every hour.

Doctors consider that the unclean conditions of the camp housings may be one of the causes for creating the cholera epidemic. They also considered that there has been no cholera outbreak in Haiti since the 1960s. Specialists have warned that the situations are grown for disease to hit in areas with limited clean water. 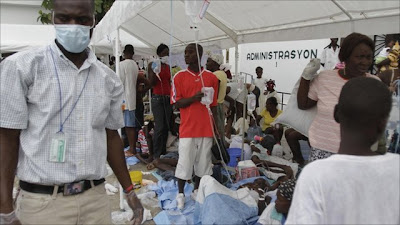 According to a deputy director of the Pan American Health Organization’s Regional Office for the Americas, Jon Andrus, the number of cases will continue to grow because Haitians do not have any built-up protection for cholera.

Health officers are worried about the quickly spreading of Cholera epidemic into the capital in which lot of people are living in unhealthy conditions in refugee camps.

Claude Surena, the Haitian Medical Association president said, “It will be very, very dangerous. Port-au-Prince already has more than 2.4 million people, and the way they are living is dangerous enough already.”

The World Health Organization Aid groups stated that Aid groups and the government were deploying the medical teams and relief supplies that include 10,000 boxes of water purification.
The conditions of the patients are very miserable in the hospital. All bed of the hospital are already full so many patients lay on the floor awaiting treatment at the St. Nicholas hospital in the seaside city of St. Marc where some of them brushing away flies on mattresses marked with human feces.

Two hospital employees has brought the dead body to the morgue at the back side of the hospital and sited it on the ground for the family in order to a funeral.

A family member of patient said they had been drinking water from a river running down from the central plateau region. And Health Minister Alex Larsen said on Friday that the water of the river examined and found contaminated of cholera.