You are here: Home / Auto / New Honda City Vs All Competitors: Pros and Cons

New Honda City Vs All Competitors: Pros and Cons

Compare all New Honda City 2014 with other sedan cars of same range like Hyundai Verna, VW Vento, Skoda Rapid, etc. Pros and Cons of these cars will help you take better decision before planning to buy any new car.

When you think of a sedan, mostly the first car coming in mind of Indians is the Honda City because of its value, reliability, practicality, overall characters and all the virtues for which Honda is recognized. Now the battle is brewing in the sedan cars; as Honda has introduced the much-anticipated fourth generation City in the Indian car market that too with five variants – E, S, SV, V and VX in each, petrol and diesel fuel trims and being priced in a range of Rs. 7.42 – 11.10 lakhs. Honda City is ruling among Indians since its very first launch but due to some delay, the C-segment has seen tough competition with the oil burners like the Volkswagen Vento and the Hyundai Verna, leaving the City way behind in the sales charts. Considering this factor, Honda has launched the all new City with a diesel heart and a lot more bling, and planning to get back its lost glory and to stay ahead of the competition. Check out here the comparison of all New Honda City 2014 with other sedan cars like Hyundai Verna, VW Vento, Skoda Rapid, Ford Fiesta, Fiat Linea. 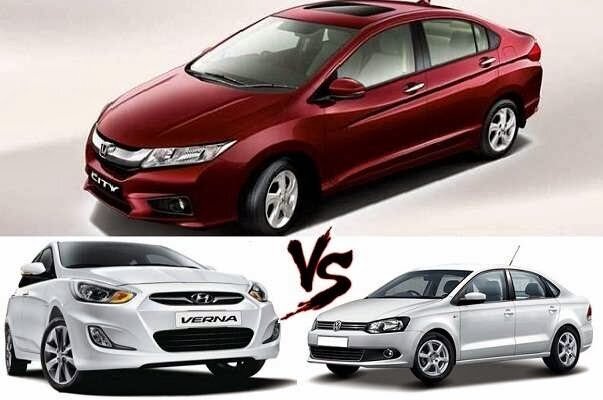 The third generation City is still a wonderful car and the new model is greatly enhanced which puts this car in a wholly new league. The refreshed City has got everything like performance, styling, improved interior room, big list of equipments and others, which makes it a perfect car to drive home. In terms of fuel efficiency, the good mileage of 26kmpl ARAI certified leads the new City diesel to be at the top. Moreover, Honda has blessed the new sedan with newest features such as Cruise Control, Smart Key, Rear parking camera, Pinch Guard, In-built Music System with USB, Aux, FM, CD, and MP3, Blue tooth, 5″ Monitor, 8 Speakers.

The new City indeed boasts an evolutionary design that makes it appear way better than its competitors. The sedan carries Honda’s new “Exciting H-Design” language, which will be soon available on their other models too. With a keen eye, you can easily see the difference with the old model… thanks to the extensive revisions made to the panels of the sedan, it is very clear when you observe both these vehicles side by side.

The interiors of the new sedan could pass off as a revolution, the car scores high in ergonomics, the dashboard is driver centric, controls fall within reach and the instrument cluster has a user-friendly layout. The rear has huge amount of legroom also when the front seats are pushed all the way back, things are usual behind. The seats are well cushioned and give good support in addition with twin AC vents for extreme comfort. There are lots of storage spaces inside the cabin, plus a toll receipt holder below the headlight leveler, and the company has provided four power outlets to the new car – 2 at the front and 2 at the rear, which is fairly handy these days.

The only weak point of the previous City model was the lack of a diesel engine, which would be for its competitors like the Verna. But no more, as the new Honda City 2014 has come and it’s superior in every way like it has two engines with the star being the 1.5L i-DTEC diesel engine of Earth Dream Technology series. The diesel engine is combined with 6 speed manual transmission gearbox, which gives easy gearshifts. On the handling side, the steering is very flexible and efficiently manoeuvres on city roads, and once the car picks up speed, it gets a bit rigid to offer better stability.

The Honda City diesel has highest ARAI fuel efficiency figure of 26kmpl among its opponents – Verna has an efficiency of 22.32kmpl, Vento – 20.5, Rapid – 22.3. The new Honda City Diesel produces 98bhp and 200Nm of torque, and is powered by the same 1.5-litre diesel mill that available in the Amaze compact sedan, the Volkswagen Vento and the Skoda Rapid gets the 1.6-litre unit that produces 103bhp and 250Nm of torque, whereas the most powerful of the lot is the Verna, which has a 1.6-litre oil burner that produces 126bhp and 260Nm of torque.

The first look inside the new City is just mesmerizing as everything falls flawlessly on the place. The interior styling is all enthused from the layered Floating Cockpit, and it has integrated every functional element just near to be perfect. The new Honda City measures 4440 mm in length, which is same as the previous City and so is the 1695 mm width, however now its height is at 1495 mm, which is 10 mm more and helps in avoiding speed-breakers with ease. The changes are bigger inside, and the cabin is upgrading over the previous City. Not a single element left to make the person feel relaxed inside the car, as it comes with all latest features such as Smart Key, Pinch guard, Cruise control, etc. More sophisticated features include push button start, sunroof, and touch panel for AC, while other safety features are ABS, EBD and a driver airbag. When coming to the quality of the material used, the new City has got better material compared to its predecessor.

Coming to the interior details of Hyundai Verna, it features an unclustered dash, which again comprises of different elements located at the right place. However, there are a number of functions to operate for a driver, which might create some hassles for him. Otherwise, the cabin is certainly classy with high quality of material being used. When talking about the interior features of the Volkswagen Vento and Skoda Rapid, there is very little to differentiate. The VW Vento comes with an ash tray, cigarette lighter, and its Bluetooth system can be even used to play music, while the Skoda Rapid gets brake assist and mirror mounted OVRMs. The new Polo will be also available this year; it means there will be a new Vento some months after the Polo is launched. It is probable that the Polo will obtain the segment standard features in the new car.

In terms of the exteriors, the new Honda City has got major updates, keeping hold on overall design of the current cars. At 4.44 meters, it is considerably longer than the Verna (4.3 meters), the Vento (4.38 meters), the Rapid (4.386 meters), and therefore has a longer wheelbase i.e. more interior space. The design is not simple as of the Volkswagen Vento, and not edgy and aggressive like the Hyundai Verna with fluidic design philosophy. The grille of the new sedan has been altered to fit the Japanese automaker’s ‘Exciting H Design’ and it is same as the one appeared on the new Jazz/Fit. The Verna was the first fluidic design car to be launched in India, and always had people wave in its direction for its appearance and design. Volkswagen always prefers minimal badging, and so the Vento has sustained much with the similar design since it was launched during the earlier decade. While its Czech cousin, the Rapid recently got a facelift in the form of new Skoda badges and revisions to the rear and front although it has the same overall design as earlier.

Table showing comparison of Honda City VS other competitors: